KGO
SAN JOSE, Calif. (KGO) -- A youth soccer team is hoping a fire that destroyed their coach's home in south San Jose didn't also destroy the possibility of playing this upcoming season. The soccer club, CA San Jose Fuerza, uses fields at Watson Park for their home games. Some of the money used to help pay for the fields was burned in a fire that was terrifying for a neighborhood.

The devastating fire on Snow Drive did more damage than what you can see on the surface. Five homes were burned. Three sustained major damage.

On Monday, yellow tags were on the structures as fences kept people out. The flames started quickly Sunday afternoon.

"I was like, 'dad, there's fire there's fire,'" said evacuee Lizette Rangel. "And he starts trying to put it out but it gets too big. And then he's like, 'just grab the keys let's go.' So we moved our cars, we got our dogs. I couldn't go back inside cause once I did, things were already in my room... Mine and my brother's room were closest to the fire."

Her father, Rigo, is a soccer coach for the CA San Jose Fuerza under 18 and under 15 boy's teams. They're a part of the NorCal Premier Soccer League.

His assistant coach Richard Johnson says the season starts in September. So Rigo has been collecting money from parents this summer to help pay for tournaments, referees, fields, equipment, and other expenses.

Johnson says about $3,000 in cash was inside Rigo's home at the time of the fire, along with soccer equipment. All of it was destroyed.

Many of the players come from low income families who don't have checking accounts.

Johnson says Rigo has no renter's insurance and is still trying to figure out where he and his family will stay long term.

Although many things were taken away in this fire, family and soccer are still there for Rigo.

"It's frustrating," said Johnson. "But at least they're alive. And one thing I tell you is we're going to have soccer this week because if we don't, he's going to be miserable."

Several payments are due soon for CA San Jose Fuerza including league fees and the money it takes to rent the fields at Watson Park.

Johnson says he isn't sure where they're going to get the money from, but he says they'll figure it out.

The fire didn't just burn homes. Embers flew over from the house fires and started a brush fire next to Highway 101, prompting the CHP to close one southbound lane while firefighters put out the flames.

Twelve people were displaced, but no injuries were reported in either fire.

Embers from house fires on Snow Dr in #SanJose caused brush fire next to Hwy 101 near Hellyer. Photos from @traines97 pic.twitter.com/8K4OIIJwrm 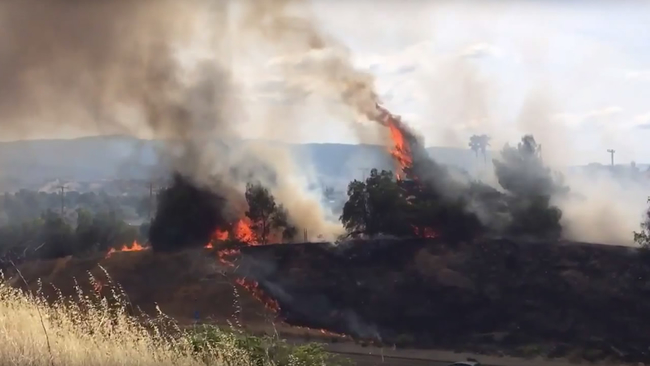