ESPN
By Pierre LeBrun
ST. LOUIS -- There's a statue outside the rink here of the player who most influenced a young Wisconsin kid named Joe Pavelski years ago when it came to becoming the type of goal scorer he is today: A player with an incredible ability to redirect pucks for goals or snipe others from the slot on one-timers.

"Brett Hull," the San Jose Sharks captain responded Monday night when I asked him which player he tried to model himself after as a young athlete. "His hands in front of the net were just so good."

We'll ignore the hurtful irony for Blues fans that it's a former St. Louis Hall of Famer who inspired the current Blues-killer Pavelski in wanting to perfect the science of making a living of scoring from the slot.

First, it was Pavelski tying the score 3-3 in Monday night's Game 5 with a one-timer from the slot on a power play with 1:27 left in the second period.

"That third goal was the killer," Blues head coach Ken Hitchcock said after the 6-3 loss.

"It was huge, it was huge," Sharks linemate Joe Thornton, who set up -- well, who else? -- Pavelski for that tying goal. "The guys felt good about themselves coming into the dressing room. You could kind of feel the momentum shift a little bit."

Then, just 16 seconds into the third period, there was Pavelski redirecting a Brent Burns point shot behind Jake Allen for a 4-3 Sharks that lead they would never relinquish.

"He works on that almost every day,"Tomas Hertl, another of Pavelski's linemates,said while shaking his head. "Every time he practices it, he never misses it. It's unbelievable. I've never seen before someone practice so hard on that. He's great. He scores almost every game on those goals. He's our leader. Again tonight, a winning goal."

It's a skill, yes, but one that is honed in only one fashion: workmanlike repetition. In the heat of summer in Wisconsin, during the dog days of the season in February and even now during the rare postseason practice days, Pavelski has worked on his tipping ability again and again and again.

"Best in the world, I think, at tipping pucks," said teammate Logan Couture. "I get to see him every day, but I think he's the best."

"He's practiced that for years," he said. "If you put work in like he does, like tipping pucks, knowing his body and where to put his stick, results happen like that all the time. We're used to seeing that so much. He just works so hard in practice on those little things. And with Burnsy, those two are always working together. It's beautiful to watch."

Burns confirmed after the game that he was not trying to score but instead was shooting so Pavelski could redirect the puck -- just as the two of them have practiced forever.

It is for these moments, in the biggest win yet in the 25-year history of the San Jose franchise, that those boring drills in practice bear fruit.

"It's incredible," Sharks head coach Peter DeBoer said of Pavelski's tipping ability. "You think back to some of the best scorers ever. His ability to get his stick on pucks in the offensive zone, in front of the net, different angles, is as good as anybody I've ever seen.

"But it's a great lesson. He works at it. He works at it every day. He gets Burnsy or one of the other D, gets them to fire 100, 200 pucks. I'll watch him from the boards with the other coaches. He'll get a piece of every single one. It's something that he has worked at.

"It's a great lesson for kids out there that want to play. You have to work at those things to become really good. He's got some God-given ability too. His biggest asset is he works at it."

It was yet another monster night for Pavelski, Thornton and Hertl, with the Sharks' top line combining for two goals and five assists. But they weren't alone in the gigantic Game 5 victory. Defenseman Marc-Edouard Vlasic was all-world once again, putting up a goal and an assist but doing his best work in his own end.

There were many other contributions too: Third-line center Chris Tierney, veteran winger Joel Ward, second-line center Couture and his linemateJoonas Donskowere all at their best on this night.

They had to be. Because the Blues brought it. This was easily the best game of the Western Conference finals: two Stanley Cup contenders slugging it out in a very entertaining affair with a ton on the line.

"Both teams knew what was on the line tonight," Thornton said. "It was just a good hockey game."

And now the Sharks sit on the precipice of franchise history, one win away from their first trip to the Stanley Cup finals.

Just imagine what the Shark Tank will be like on Wednesday night for Game 6 in San Jose.

One win away. It's hard to ignore that's behind that curtain.

"You're going to think about it," Tierney admitted. "That's just a little more motivation to come out for that game [Wednesday] and win. You don't get this chance every day on home ice. Sometimes you might not get this chance in your career, or maybe once.

"I think guys know that and they really want to take advantage of it."

Pavelski's wicked deflection scores game winner
Joe Pavelski redirects Brent Burns' shot to find the net, breaking a 3-3 tie and putting the Sharks up for good over the Blues in Game 5. 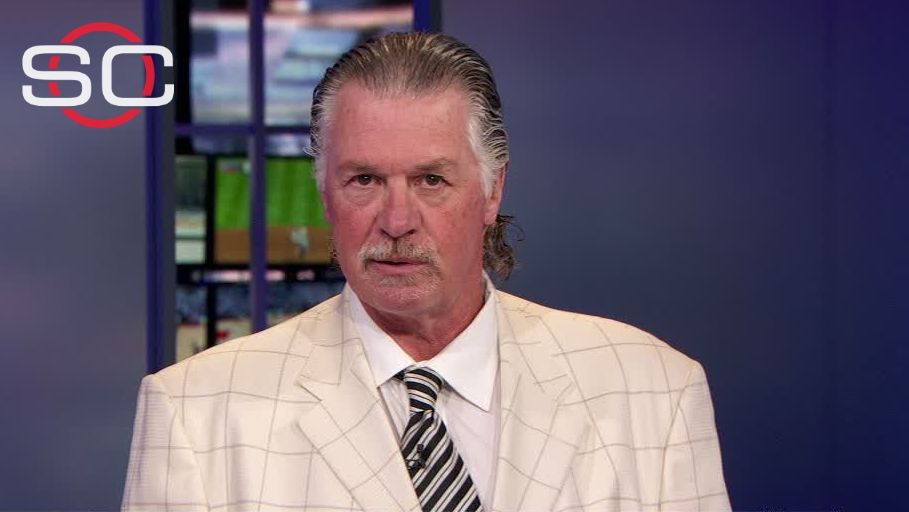 Melrose: Tarasenko needs to step up
Barry Melrose breaks down the Sharks' 6-3 win over the Blues in Game 5 and how Vladimir Tarasenko has been a nonfactor throughout the Western Conference finals.

Sharks take command with pivotal Game 5 win
The Sharks score the last four goals of Game 5 to take the 3-2 series lead over the Blues in the Western Conference finals.