Sharks vs. Avalanche in Game 7: X factors and our picks 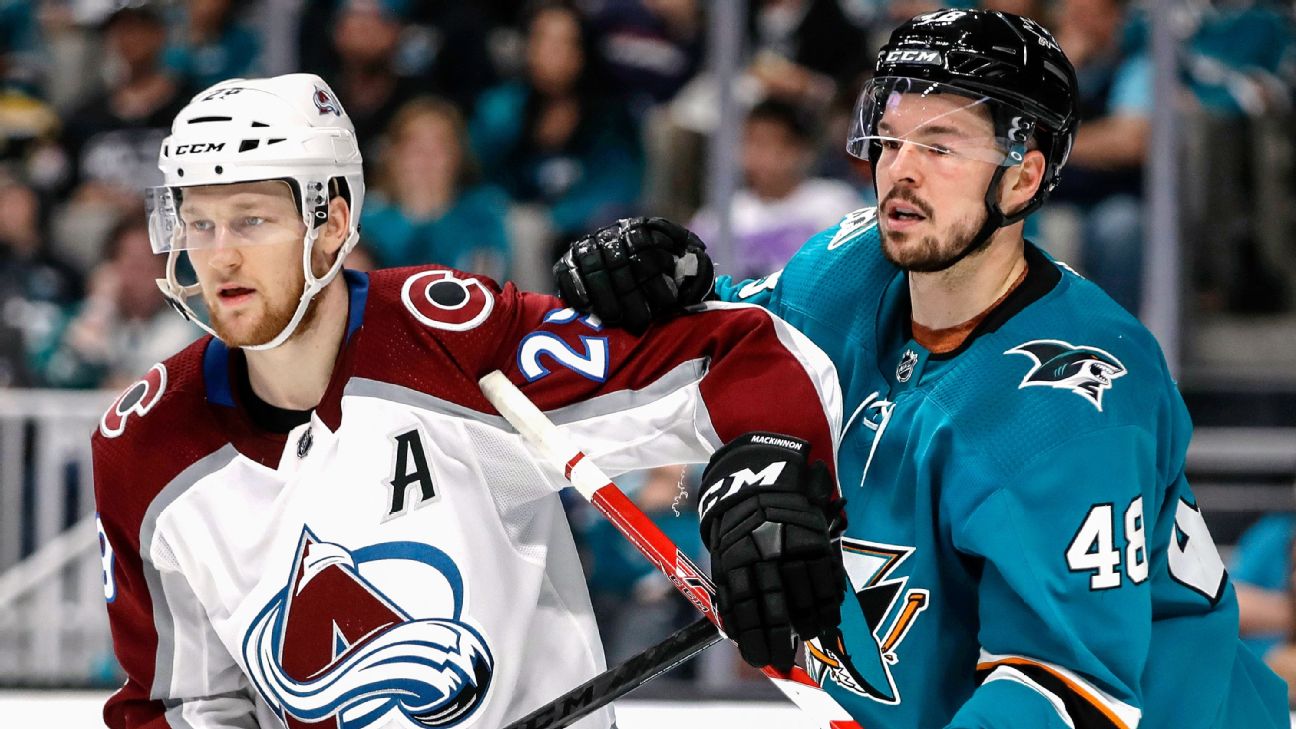 The San Jose Sharks and Colorado Avalanche will face off one more time this season, with Game 7 set for 9 p.m. ET Wednesday in San Jose. We debate the key factors that will determine the outcome and make our picks.

Who or what will be the X factor for Game 7 of Sharks vs. Avalanche, and who ya got?

Greg Wyshynski, senior NHL writer: I like the Sharks in Game 7. They were the better team in Game 6, and the job they've done defensively on the Nathan MacKinnon line should continue for another game. They've been in this position (too) many times, and getting this one at home is huge. My ultimate X factor is Joe Pavelski, who is a game-time decision. He hasn't played since his horrific head injury in Game 7 against the Vegas Golden Knights, but he has skated with the Sharks, accompanied them to Denver and has spoken with reporters on multiple occasions. So he's close. If he plays ... well, the emotional dynamic of Game 7 changes immensely. Heck, Pavelski just showing up to wave to the crowd in Game 5 produced the loudest ovation of the night.

But if Pavelski can't go, I'll go with Tomas Hertl of the Sharks. He has seven goals and four assists in seven home games in this postseason. He had a goal and an assist in Game 7 against the Golden Knights. Hertl had his best campaign as a pro this season, and that momentum has continued in the playoffs.

Emily Kaplan, national NHL reporter: Seeing how frisky these playoffs have been so far, I'm picking the Avalanche for the upset -- in another overtime game. The Avs' top line is my X factor. MacKinnon is the No. 1 superstar remaining in these playoffs; MacKinnon, Gabriel Landeskog and Mikko Rantanen rival Boston'sDavid Pastrnak, Patrice Bergeron and Brad Marchandline as the best left playing this spring. Even with Landeskog's overtime goal in Game 6, the Avs' top line hasn't been its usual self the past two games. It was most obvious in Game 5, when MacKinnon and Rantanen combined for just three shots on goal. MacKinnon is playing monster minutes (including a team-high 26:32 in Game 6), which is forcing the Sharks to use their top defensemen plenty (Brent Burns was over 30 minutes in Game 6; Marc-Edouard Vlasic was at 26:10). Eventually, I think he's going to wear on them and capitalize on his scoring chances.

Chris Peters, NHL draft and prospects writer:Watching the way Colorado zipped around the ice in Game 6 and the way the Avs weathered each response from the Sharks impressed me. Yet I can't escape the fact that San Jose is more experienced and deeper and knows how to close a series, so I have to lean San Jose here. The X factor for me in this one is Logan Couture. Of all players in this Game 7, he has been the most productive with six points in five career Game 7 situations. He's one of the few guys who can make things at least difficult for MacKinnon, and his ability to raise his level of play throughout his career in the postseason is notable. With the potential return of Pavelski, I think there's an emotional edge swinging San Jose's way on top of home ice and the opportunity to maximize matchups.

Before I heap too much praise on the Sharks, however, I just want to note that this postseason run the Avs put together feels like a touchstone moment in this organization's redevelopment. The addition of Cale Makar and the potential to deepen the prospect pool in the upcoming draft to support the incredible core of MacKinnon & Co. is going to set this team up for a long time to have some success in a difficult division. Whether the Avs win or lose this Game 7, they have awoken a fan base that has been starving for a team like this for quite some time. And they're not just going to be perennial Cup contenders; they're going to be fun to watch, too.

Dimitri Filipovic, hockey analytics writer:It pains me to say this because I've thoroughly enjoyed watching Colorado's infectious playing style this postseason and I'm not quite ready for my time with them to end, but I'll take the Sharks. The thing that ultimately swings this deciding game in their favor is the home-ice advantage they earned throughout regular season. A big part of the reason this series has been so fun has been the chess match going on between the two coaches, as Jared Bednar tries to free up MacKinnon to run wild offensively while Pete DeBoer does everything in his power to slow him down by blanketing him with his best defensive weapons.

With the benefit of last change in the games played at home, DeBoer has done a masterful job of immediately sending the combination of Couture and Vlasic out on the ice the second he has seen MacKinnon hop over the boards. In those games played at San Jose, Couture and Vlasic have respectively been out there for 58.3 percent and 75.7 percent of MacKinnon's total 5-on-5 minutes. In the games played in Colorado, those totals have dipped to 42.9 percent and 59.9 percent, respectively. No one is going to be able to fully stop MacKinnon, but those two at least give the Sharks a fighting chance of at least making Colorado's best player work for every chance he gets. Given how tight this series has been, that extra little bit of leverage could very well be the difference between advancing to the Western Conference finals and going home early.

Sachin Chandan, ESPN The Magazine researcher: The X factor for the Sharks is goalie Martin Jones. The Sharks regularly give up a lot of shots so far in the playoffs, and Jones has faced 49 high-danger shots in the second round, most of any goalie. The average shot against Jones has come from 30.4 feet out, the closest distance in the second round as well. To make it worse, the Sharks have been short-handed 20 times in the second round, worst in the league. As Emily wrote above, Colorado's top line can put up shots in a hurry, and if Jones falters early, the Sharks may not be able to climb back without another four-goal Game 7 power play. Jones has turned it around after a tough regular season, so if he can pull another strong effort, like in Game 6 vs. Vegas or Game 5 of this series, then I see San Jose advancing to face St. Louis.
Report a correction or typo
Related topics:
sportsespncale makarnhlnathan mackinnonjoe thorntonjoe pavelskicolorado avalanchebrent burnssan jose sharksstanley cupplayoffsmikko rantanen
Copyright © 2022 ESPN Internet Ventures. All rights reserved.
TOP STORIES
Concern over 14K COVID tests left sitting out in Bay Area lab
Half a million hospital gowns left outside in another PPE mishap
Body of missing Stanford nurse found in Fremont, authorities say
Gov. Gavin Newsom in LA after 'porch pirates' target cargo trains
Suspect shot, killed by police at SFO had replica guns, officials say
McConnell: Black people vote at similar rates to 'Americans'
Medicare not paying for at-home COVID tests for seniors
Show More
Fraud hits EDD's disability claims as doctors' identities stolen
Adele postpones Vegas residency due to COVID among crew
FBI issues new warning on QR codes
Reporter hit by car on live television, but continued reporting
American Airlines flight diverted over maskless passenger
More TOP STORIES News