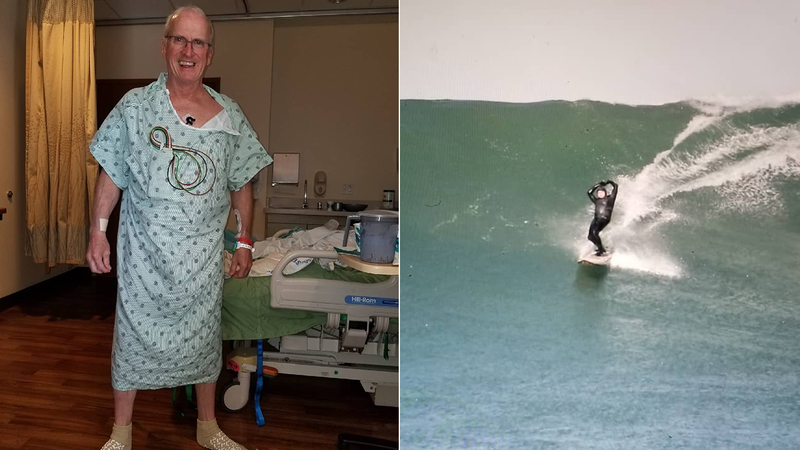 HALF MOON BAY, Calif. (KGO) -- Mavericks has given many surfers figurative heart attacks over the years, but only one man has ever had a literal heart attack at the San Mateo County infamous big wave break. And miraculously 66-year-old surfing veteran Christy Davis lived to talk about it.

Monday, March 11 started out like many other days for the Mavericks veteran.

Davis has surfed the Half Moon Bay for 28 straight seasons and knows the waves better than anyone according to Surfline.com.

In an Instagram post, Davis explains that he was having a great session when he started getting a serious pain in his chest.

"When numbness started creeping down my left arm I started to get worried and asked if someone would paddle on with me," wrote Davis.

He says he ended up paddling in most of the way with guidance from a friend to navigate the treacherous channels and avoid the underwater reef.

"I just put my head down and kept paddling and breathing."

He was able to get the beach, was driven back home and then called an ambulance. Davis underwent emergency surgery where doctors discovered that one of his arteries was 100 percent blocked.

"The doctors say it was a serious heart attack and that if I was not in such good shape that I most likely would have died," Davis wrote on Instagram.

Miraculously, doctors found only minimal damage to his heart and released him from the hospital after just two nights.

RELATED: Surfer recounts tale of brutal wipe out at Mavericks

"I should be able to resume surfing, including Mavericks next season. Lots of meds and rehabilitation to come but I am so lucky and so relieved!" wrote Davis.

This isn't the first major health scare that Davis has overcome to get back out to Mavericks. He told Surfline.com that last May he was thrown headlong into a reef near Mavericks and broke his neck and back in several places. But he still managed to recover and get back to surf Mavericks for another year a streak he no doubt will try and keep alive next year.