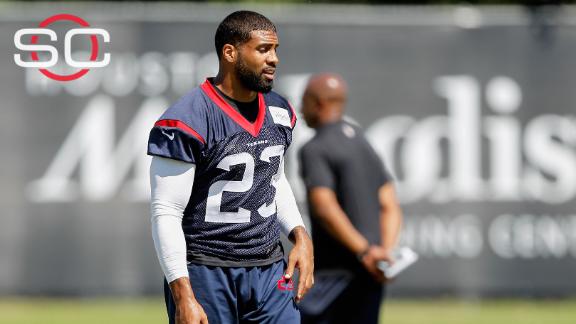 Foster likely will miss the start of the regular season. He could be placed on short-term injured reserve, which would allow the Texans to bring him back to practices after Week 6 and into a game after Week 8.

Foster suffered the injury on a pass play Monday night and did not return to the field.

Running back Alfred Blue took over some of Foster's first-team repetitions in his absence. Blue also left the field during that practice, but reportedly only did so for cramps.

Looking to fill the void created by the injury to Foster, the Texans will have RB Pierre Thomas on for a visit on Wednesday, according to ESPN's Josina Anderson and multiple reports.

If all goes well, Thomas will join the Texans in time for the team's travel for joint practices with the Redskins, a source told Anderson.

A significant factor for Thomas is joining a team that suits his skill set. Thomas, 30, was released by the Saints in March, after eight seasons. His agent, Lamont Smith, said he would neither confirm nor deny any of Thomas' team visits.

Foster ranked sixth in the NFL last season with 1,246 rushing yards even though injuries caused him to miss three games entirely and parts of three others.

He missed two games last November after suffering a groin injury against the Philadelphia Eagles. He also missed the Texans' Week 3 contest against the New York Giants with a hamstring injury.

Since 2010, Foster has the most 100-yard games (31) among running backs and is averaging the most yards from scrimmage per game (121.2), according to ESPN Stats & Information.