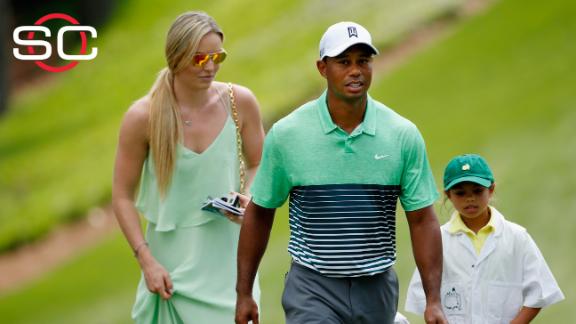 PONTE VEDRA BEACH, Fla. -- This is always a difficult time of year for Tiger Woods -- and it has nothing to do with Players Championship course conditions or the state of his game.

Sunday marked the nine-year anniversary of Earl Woods' death, and Woods admitted that thoughts of his father have caused some restless nights, compounded by his recent breakup with Lindsey Vonn.

"It is tough, there's no doubt," Woods said Tuesday morning after a nine-hole practice round. "I'm not going to lie about that. It is tough. And on top of that, this time of year is really, really hard on me.

"This three-day window is really hard. I haven't slept these three days, May 3rd and through the 5th, today, is just brutal on me. And then with obviously what happened on Sunday, it just adds to it."

Woods and Vonn each separately announced their breakup on Sunday after nearly a three-year relationship.

Woods, of course, is no stranger to having his personal life in the public spotlight, a fact that he acknowledged and hopes won't affect his performance this week.

"Once you're inside the ropes, it's time to tee it up and time to play," he said. "You go out there, and for me I focus, I get into my little world, my little zone and do the best I possibly can for that -- well, it used to be four hours; now it's five-hour rounds -- a five-hour time period, grind it out and win golf tournaments. Because at the end, to me, that's what I want to do that particular week, is win a tournament."

This particular week, Woods will make his first tournament appearance since finishing in a share of 17th place at last month's Masters. After a miserable start to the season and a nine-week layoff, he remains cautiously optimistic that he can build on that momentum.

"I'd like to say yes," Woods said. "I've had some pretty good practice sessions. My short game still feels really good. We made a couple little swing tweaks since then to keep improving, to keep working on it, to keep getting it better, so that part is still a little bit fresh.

Woods looked rusty in his early-morning practice round, missing shots to both the right and left that led to a few lost balls.

If that's the bad news, though, the good news is that the wrist injury he suffered on the ninth hole during the final round of The Masters has finally subsided, and he's no longer feeling any pain.

"It's fine," he insisted. "I took a full week, didn't lift at all. I did leg stuff but just didn't do anything with my hand. Completely got away from it, anything with lifting or grabbing. I was getting treatment every day through that period, and then after that started building up the strength in the hand and the forearm and then eventually the whole upper body."

Once again, Woods maintained that he put the joint at the base of his hand back into place during that round. He explained that process on Tuesday.

"I pushed down on it. It's just like anything; you crack your back or your neck and it's relief," he said. "Before it was like, 'Man, it's stuck.' That's what my wrist felt like, it was stiff, and the wrist wasn't moving, and I could feel it getting tighter and tighter and tighter, so it's like a self-adjustment on your spine. I just did it on my wrist."

Tough times for Tiger Woods
Tiger Woods says his split with Lindsey Vonn and the anniversary of his father's death have led to sleepless nights.