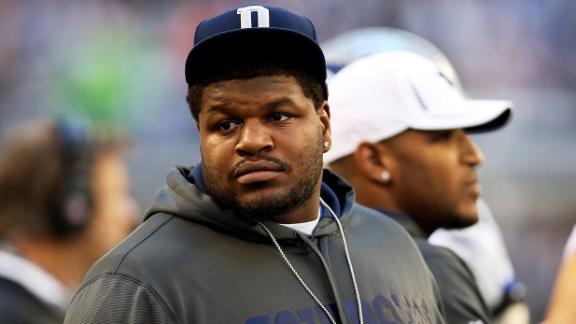 The mother of a Dallas Cowboys practice-squad player who was killed in a December 2012 car crash says she's "very happy" that the NFL has decided to conditionally reinstate defensive tackle Josh Brent, who was driving the car while intoxicated.

"I'm very happy Josh has been reinstated with the Dallas Cowboys!" Stacey Jackson, the mother of Jerry Brown Jr., told The Dallas Morning News on Wednesday. "My beautiful son is in heaven now, and Josh has to be given a chance to live his life and do something for someone else.

"We all make mistakes, and we all have an entrance date and an exit day. Although I miss Jerry every day, I know he would be very happy that Josh has another chance to play football."

Brent and Brown, a linebacker, were driving home at the end of a night partying with teammates when Brent lost control of his Mercedes and crashed on a suburban Dallas highway. The first officers to arrive said Brent was trying to pull his friend's body from the wreckage.

Prosecutors said Brent was driving as fast as 110 mph and that the 320-pounder's blood alcohol content after the crash was 0.18 percent, more than twice the legal limit. This past January, he was convicted of intoxication manslaughter and sentenced to six months in jail.

He spent the final 45 days of his sentence at an alcohol and drug treatment center. He has been working out at Michael Johnson Performance in McKinney, Texas, since his release.

The NFL on Tuesday said Brent must first serve a 10-game suspension and that his return is conditional on staying out of legal trouble and "any prohibited alcohol-related conduct will likely result in an immediate suspension and potential banishment from the NFL."

Brent's agent, Peter Schaffer, told ProFootballTalk.com they would appeal the decision, pointing to the fact that his client voluntarily retired.

"He could have forced the NFL to go through a tremendous amount of scrutiny for allowing him to play pending trial or for attempting to suspend him before he had been proven guilty," Schaffer told the website. "Where's the incentive for someone to do that in the future?"

Jackson said she was happy to see Cowboys owner Jerry Jones fulfill his pledge to her about giving Brent a second chance.

"Josh doesn't have to answer to you or me. He has to answer to God, about what he has done with his second chance," Jackson told the Morning News. "Who has he helped with this opportunity that he has been given? I [would] have to answer to why I didn't forgive him and live out my life with taking care of my family."

Todd Archer of ESPN.com and The Associated Press contributed to this report.