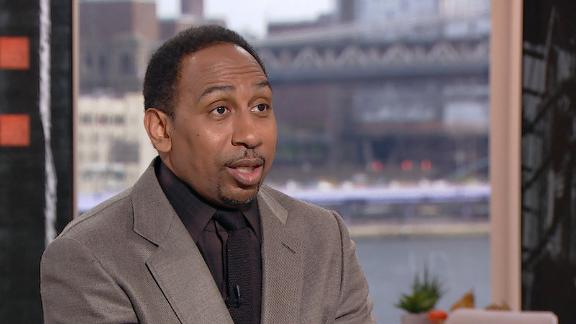 OAKLAND, Calif. -- The Golden State Warriors begin their quest to be the first to win three straight NBA championships in nearly two decades when they host the Oklahoma City Thunder in the nightcap of the league's opening day double-header on Tuesday night.

Kevin Durant will go up against his former team for the eighth time since leaving as a free agent in 2016, but likely won't go head-to-head with longtime teammate Russell Westbrook, who is expected to begin the season on the sidelines following arthroscopic knee surgery.

The club split their four-game season series a year ago, with the Thunder winning the first two contests, including a 20-point blowout at Golden State on Feb. 6.

Oklahoma City newcomer Dennis Schroder, who was imported from Atlanta in a three-team deal in July that saw Carmelo Anthony eventually wind up in Houston, recalls watching previous Thunder-Warriors matchups for their high drama quotient.

"It was always entertaining," he said. "Watching that game, you were already excited at home because it's so much intensity they're playing with."

Schroder is expected to team with Westbrook in the backcourt this season. For now, he'll be paired with Terrance Ferguson, who played 64 minutes in the preseason and took just eight shots.

More of an offensive burden will fall upon Paul George, who averaged 29.0 points in Oklahoma City's two wins over the Warriors last season, but was held to 12.5 points per game in the two losses.

The Thunder had a penchant for knocking off the big boys last season, going 6-3 against the clubs with the three best records in the regular season -- Golden State, Houston and Toronto.

The Warriors, meanwhile, open the season at home in a marquee matchup for the third consecutive season. The previous two have not gone well, with San Antonio and Houston ruining ring-ceremony night with stunning wins the last two years.

Playing at home wasn't necessarily an advantage for the Warriors last season, as they finished with the same record in Oakland (29-12) as on the road (29-12).

Warriors coach Steve Kerr, whose team won nine fewer games in the regular season last season than the year before while leading the league in technical fouls, has stressed having fun as the goal of this year's regular season.

"I'm going to soak it all up," assured Warriors shooting guard Klay Thompson, one of the team's three key pending free agents this season along with Durant and DeMarcus Cousins. "We just have to stay focused and enjoy every night. If we have the joy and focus, we'll be great."

The Warriors are seeking to become the first team to three-peat in the NBA since the Lakers did it from 2000-02. They will do so with basically the same core as last season, until Cousins returns from Achilles surgery probably sometime between Christmas and the All-Star break.

The Warriors totaled 47 turnovers in their two losses to the Thunder last year, then took better care of the ball in the final two meetings, losing it just 27 times.

The Thunder has won all three of its season openers since Billy Donovan took over as coach, beating San Antonio, Philadelphia and New York.