Will Middlebrooks (calf) placed on DL 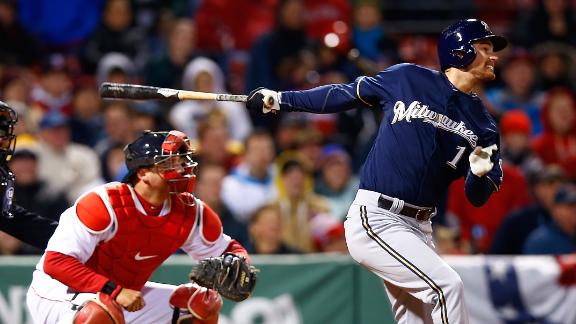 BOSTON -- The Red Sox placed third baseman Will Middlebrooks on the 15-day disabled list Sunday with a strained calf.

The Red Sox announced prior to Sunday's game against the Milwaukee Brewers that Middlebrooks has been diagnosed with a Grade 1 calf strain.

Red Sox manager John Farrell said he expects Middlebrooks, who underwent an MRI on Sunday, to return to the lineup when he is eligible to be activated.

Red Sox designated hitter David Ortiz made his return to the third spot in the lineup Sunday as Boston attempts to avoid a three-game series sweep at the hands of the Brewers.

Middlebrooks sustained the injury warming up prior to Saturday's contest against Milwaukee. The injury is a difficult setback for a young player who was looking to rebound from a down year and had been swinging a good bat since spring training.

"He was disappointed yesterday when he first felt the calf grab him," Farrell said. "Today's exam probably confirmed some of the thoughts yesterday based on the way he was reacting and responding to the sprints that he went through and what he felt afterwards.

"Unfortunately we're missing a power right-handed bat that was getting off to what looked to be a pretty good start."

Jonathan Herrera gets the start at third base for the second straight game Sunday in the series finale with the Brewers. To replace Middlebrooks on the 25-man roster, the Red Sox recalled infielder Brock Holt from Triple-A Pawtucket.

Ortiz, who has also dealt with a calf issue of his own since spring training, was out of the lineup Saturday with what Farrell called a "planned down day" for the slugger.

The Red Sox had returned early Friday morning from their season-opening series in Baltimore and then played a game that afternoon after a lengthy and emotional World Series ring ceremony. Ortiz pinch hit with two outs in the bottom of the ninth Saturday, grounding to first to send the game into the 10th.

Daniel Nava returned to the leadoff spot Sunday after batting third in the extra-inning loss. Grady Sizemore, who was atop the order for the first time Saturday, will get the day off while Jackie Bradley Jr. will play center field and bat eighth.

Holt, who started 17 games at third base for Boston in 2013, was 4-for-11 in his first three games with Pawtucket while playing second base and shortstop.

Farrell said he will utilize Herrera and Holt based on matchups. Garin Cecchini, one of Boston's top prospects, needs to display more progress with the glove before he gets the nod in such situations.

"While he's had good at-bats there, there's still some development defensively that's taking place," Farrell said of Cecchini, who is 5-for-9 with a double for the PawSox. "His time is coming but didn't feel like it was right now."