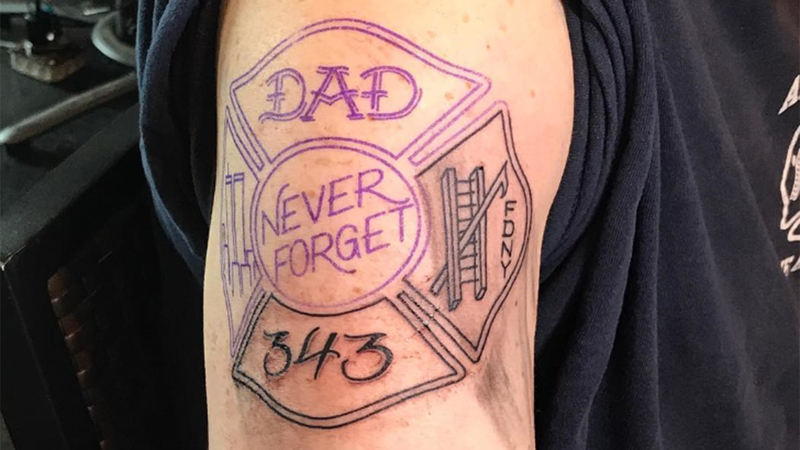 NEW YORK -- It's been almost 16 years since the September 11th terror attacks, but for so many the pain is still fresh.

Now, survivors and first responders of that fateful day are working to heal their physical and emotional scars in a unique way -- with a tattoo "Without ever saying a word to anyone, just by showing this," survivor Thomas Canavan said. "Being at a pool, they come up they're going to know. And they're going to think of 9/11, and it will stay in their conscience."

Canavan is one of only 19 people who survived being buried under the rubble of the Twin Towers on 9/11. And having lived through and with that trauma, he sees a tattoo as one way to ensure that the rest of the world never forgets.

"Like the tattoo says, he's a survivor," artist Zero said." He endured something that most of us will probably never see."

PHOTOS: The 9/11 attacks on the World Trade Center

It's all part of the Healing Ink Project, a group of the city's most famous tattoo artists covering the scars of 9/11 survivors and first responders with beautiful works of art.

"Helping them to reclaim their body and see themselves the way they want to be perceived, and not with marking of that tragic event," Artist 4 Israel's Craig Dershowitz said.
Healing Ink was first introduced to terror survivors in Israel, and it is now soothing lingering wounds here as well.

Gary Smiley was an FDNY paramedic critically injured in the collapse of the North Tower. His new tattoo is in remembrance of the 343 firefighters who died that day.

"My saying and the FDNY motto," he said of his new tattoo. "If you talk about the memory of those that we lost, their memories never die."

It is perhaps a tangible reminder of not only pain, but perseverance.

"I know tattoos heal people because I've seen it happen," artist Virginia Elwood said. "They healed me, so I know it will work."