Matt Damon, Ben Affleck reunite on and off screen in 'The Last Duel' 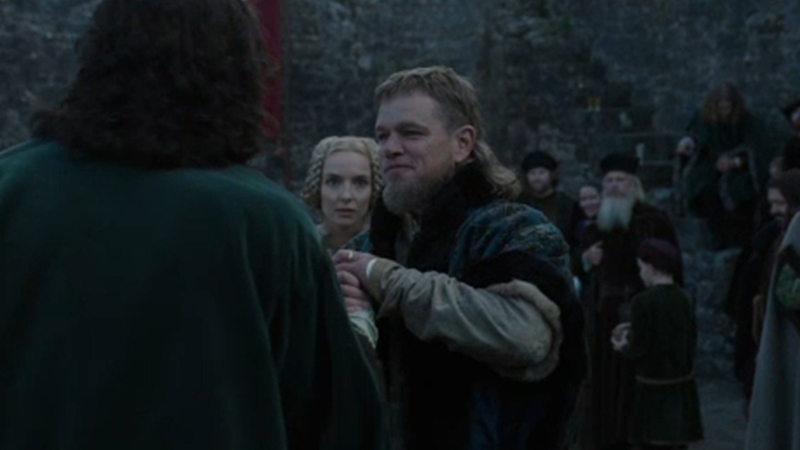 Damon, Affleck reunite on and off screen in 'The Last Duel'

"The Last Duel," a new movie opening in theaters this weekend, reunites Ben Affleck and Matt Damon on screen and off.

It's been a quarter of a century since the friends won Oscars for writing "Good Will Hunting."

This time, the pair enlisted another scriptwriter, Nicole Holofcener, and recruited director Ridley Scott to tell a story that actually took place more than 600 years ago.

"The Rescue" is one of the most emotional and thrilling movies of the year. It's remarkable because we know the story has a happy ending!

"The Last Duel" refers to the last government sanctioned duel in France that ever took place.

The tale is told from three different perspectives, meaning we see some of the same events several different times.

First, two men try to explain how the duel came to happen. It seems one nobleman sexually assaulted the wife of another.

Damon plays the husband, while Adam Driver co-stars as the attacker.

Then, the audience is given the truth from the woman who was raped, played by Jodie Comer ("Killing Eve").

"The scary thing is that you realize that we've come so far, and yet we have seemed to learn very, very little in a lot of respects," she said.

Affleck praised her work in the film.

"Jody really shows through her magnificent performance and embodiment of this character, the humanity of the character, the truth of what happened," he said.

Back in the 1380s, women were considered to be the property of men.

"The bravery that this woman had in that time to speak truth to power, to tell the story at great risk to herself, was so heroic," Damon said.

The warmth of the two old pals was evident on the red carpet at the New York premiere of the film.

Academy Museum of Motion Pictures opened on Sept. 30, and now it's the subject of an ABC primetime special hosted by Tom Hanks and Laura Dern.

Affleck, who arrived with his current companion, Jennifer Lopez, takes a supporting role in the picture as a lecherous prince.

"We became really close, really young through the formation of our characters, our personalities," Damon said of his friendship with Affleck. "It's more like a family member, you know, so I never questioned why."

Now, they're both part of the Oscar conversation again, along with Comer.

"The Last Duel" is tough to watch, but the brutality of the Middle Ages serves a larger purpose beyond mere entertainment -- to get us talking about violence against women that is still all too common so many centuries after this story takes place.