Flight attendant-turned-author's book could head to the big screen 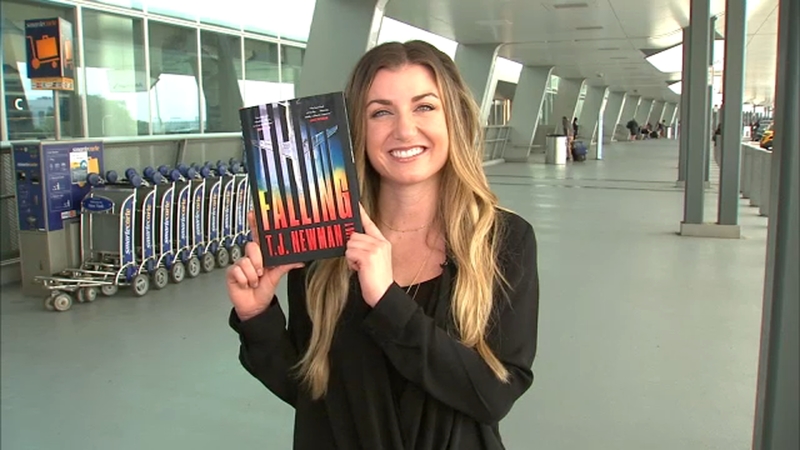 Flight attendant-turned-author's book could head to the big screen

NEW YORK -- T.J. Newman spent a decade working as a flight attendant, experience working in the air she has put to great use to write her first novel called, "Falling."

"I just can't believe that I'm back in New York, you know, the place where my first dream never took off," the Phoenix, Arizona resident said outside Terminal B at La Guardia Airport.

"Black Widow" grossed $13.2 million in preview showings on Thursday night, and The film is projected to gross $80 million or more before Monday.

Newman graduated with a degree in Musical Theater and dreamed of stardom on stage in the Big Apple. That never happened, but in the end, she did get her name on a Broadway marquee, just not as a performer.

It happened after her big book deal when she appeared on "Good Morning America" to promote "Falling."

The novel is being called "one of the year's best thrillers," and a master of this genre, James Patterson, has endorsed it as "the best kind of thriller...totally authentic suspense."

"On a flight from LA to New York, the passengers on board have no idea that just before they took off, the family of their pilot was kidnapped," she said. "And he's been told, 'Crash the plane or your family will die.'"

She got the inspiration during a redeye flight, then asked the captain of a later flight about it.

"'What would you do?'" she said she asked. "And the look on his face terrified me, because I knew he didn't have an answer. And I knew I had a book to write."

And she wrote that book during spare moments at 35,000 feet.

"I would grab a cocktail napkin," she said. "If I didn't have time to write out a whole scene and just scribble down a note, I wrote on anything I could find."

Like so many of her colleagues, Newman was furloughed during the pandemic, which gave her time to finish her novel.

"I only put in my notice after I got a book contract," she said.

The coronavirus pandemic may have shut down Broadway until September, but the next generation of performers was determined to continue online.

The contract for two books is worth more than $1 million, and the film rights have been sold for another million bucks. But having spent a decade as a flight attendant, Newman is still getting used to her change in circumstances, especially at the airport.

"It's wild," she said. "I took my first flight after this, and it was weird. I kept feeling for my staff badge that I used to wear. It's going to take a while to get out of those habits. When I was on the flight, I kept wanting to ask if I could help. 'Could I do a trash run? Need help on the cart?'"

The ending to her story is sweet, given the fact that 41 agents rejected her idea and refused to represent her.