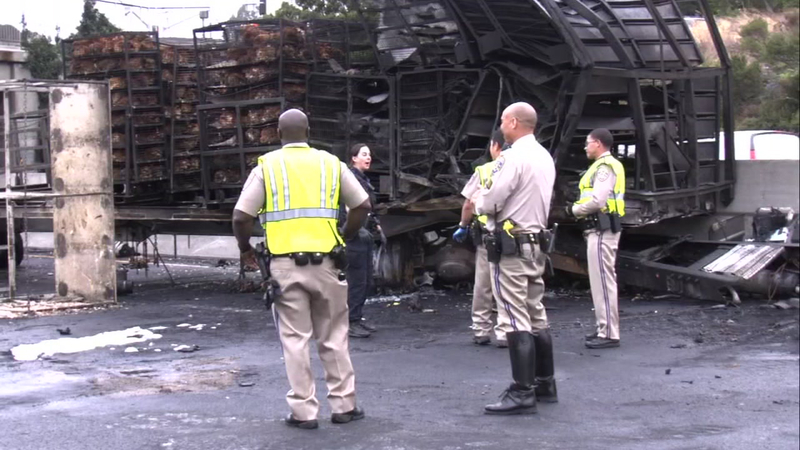 SAN PABLO, Calif. (KGO) -- A big rig carrying live chickens crashed and caught fire this morning on westbound I-80 in San Pablo, blocking all lanes and snarling traffic all morning.

The call came in just after 3:30 a.m. that the big rig was on fire. Once the fire was out and the driver was taken to the hospital, officers realized there were hundreds of chickens that survived and needed rescuing. CHP officers were carrying chickens off the burned rig or were chasing the loose ones that managed to escape.

"In my time of 16 years, I have not seen that. But we are prepared for anything. We are doing our best to take care of them. We don't want the chickens to go onto the other side of the freeway and cause an issue there. We also don't want them walking up the ramp which they have been," said Sgt. Curtis Glace of the CHP.

This is the big rig that was carrying about 1,000 chickens when it crashed and caught fire. Story here- https://t.co/0VuyhCgA4I pic.twitter.com/i3mfrOoTqU

Officers from Animal Control were also called out to help.

"Numerous birds, probably at least 200 of them, are dead and likely half will have to euthanized if not more," said Capt. Jane Andreotti of Contra Costa County Animal Services.

The driver survived. He was taken to the hospital to receive treatment for some cuts. All lanes of I-80 at San Pablo Dam Road were blocked for hours. Crews had to clean the spilled fuel, check the bridge the rig crashed into, and pick up the big rig and the shattered pieces of it. But what really took the most time was dealing with the chickens.

"Unfortunately many of them were stuck in these cages and we had to cut them open with bolt cutters and you have to pull them out and they scream and some of them have broken wings or are singed some are burned some are dead," said Capt. Andreotti.

Sgt. Glace said moving the cages off of the trailer was a delicate operation.

"It's just the coordination of getting those chickens that are still alive off that trailer. It's a situation where we don't want that trailer to fall with the chickens that are still alive. We want to make sure we handle them with care and due regard so we don't have to sustain any more injury to the animals. We are doing everything humanely possible to try and transport them and get them out of here and off the scene," Sgt. Glace explained.

The chickens belong to Pitman Farms and were on their way to a slaughter house. Animal control will take them to their shelter in Martinez. Their fate will be up to the owner.

We have reached out to Pitman Farms but have not heard back.

Investigators say the driver swerved to the right and hit the overpass, then swerved left and hit a car. No one was else was hurt. Officers don't know what caused the driver to swerve and crash.

All lanes of westbound I-80 at San Pablo Dam Road were still closed as of 10 a.m.

Firefighters dealing with chickens on I-80. They were on a big rig that crashed and caught on fire. The driver survived. pic.twitter.com/recbEtbZOE

One of the survivors of a big rig fire this morning. The truck overturned and caught fire on westbound 80 in San Pablo. It was hauling chickens- some died, some ran away (!) and others have been rescued by CHP officers. pic.twitter.com/YSNE9HhM2h

CHP officers are rescuing chickens right now from a big rig that crashed and caught fire. Many were killed- but they are finding some survivors pic.twitter.com/zV4dbSSLPh

The accident scene on WB 80 in San Pablo. A big rig overturned and caught fire. The driver was taken to the hospital because of some cuts but is expected to be ok. The live chickens he was hauling did not survive. pic.twitter.com/j3xW2ibaVd

Westbound 80 is at a crawl. A big rig carrying live chickens crashed and caught fire. It is blocking all lanes in San Pablo- just past the San Pablo Dam Road exit. pic.twitter.com/eVbIxjE2dM