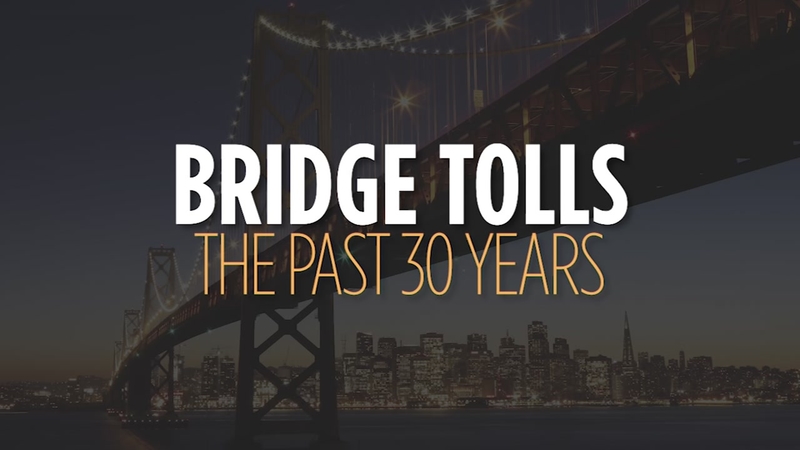 There are seven state-owned toll bridges that will be affected: Antioch, Benicia-Martinez, Carquinez, Dumbarton, Richmond-San Rafael, San Francisco-Oakland Bay Bridge, and San Mateo-Hayward. The Golden Gate Bridge is not included because it is operated by its own district, not the state. Toll information and history for the Golden Gate Bridge can be found here.

Long time Bay Area residents may remember when a few quarters, or sometimes no money at all, would get you through the toll plaza, but increases are happening more and more frequently. Let's look back on when and why they've changed.

For the first time, all seven bridges adopted a uniform toll of $1.00, the result of voters passing Regional Measure One (RM1) in 1988. Before this, bridge tolls varied widely. It cost just 40 cents to cross the Benicia-Martinez and Carquinez bridges. The Richmond-San Rafael Bridge was the only one where the toll was already $1.00. The increased toll helped fund bridge improvements for decades, including the construction of the new Benicia-Martinez Bridge. All RM1 projects are now complete.

Nine years later, tolls doubled from $1.00 to $2.00 in 1998 with the addition of a seismic retrofit surcharge. The state legislature approved the increase in the form of Senate Bill 60 in 1997: "Impose a seismic retrofit surcharge equal to one dollar ($1) per vehicle for passage on the state-owned toll bridges in the region within the area of the jurisdiction of the Metropolitan Transportation Commission, which includes the City and County of San Francisco, and the counties of Alameda, Contra Costa, Marin, Napa, San Mateo, Santa Clara, Solano and Sonoma."

This bill also allowed for research and development to begin on replacing the eastern span of the Bay Bridge, which had partially collapsed during the Loma Prieta earthquake in 1989.

California voters had already approved the Seismic Retrofit Bond Act of 1996, authorizing the sale of $2 billion in bonds to pay for earthquake safety improvements. SB60 essentially doubled that, bringing in an estimated $2.6 billion.

Bay Area bridge tolls are rising for the fifth time in the past 30 years. Here's a look at the new rates taking effect January 1st.

The Bay Area Toll Authority approved a $1.00 toll increase to generate $165 million annually for more seismic retrofit projects. The majority of the money was needed to pay for improvements on the Antioch and Dumbarton bridges, which were the last two bridges to undergo a retrofit.

For the first time, the Bay Bridge introduced congestion pricing, which set different tolls for peak, off-peak, and weekend times. A discount for carpool drivers on all bridges was also introduced at this time, allowing carpools with FasTrak to pay half the regular toll during peak commute times. Previously, carpool drivers did not have to pay any toll.

For the first time in almost a decade, tolls will rise again due to the legislature passing Senate Bill 595 and voters approving Regional Measure Three (RM3). The money will fund almost $4.5 billion worth of highway and transit improvements around the Bay Area, including new BART cars, expanded ferry service, and more express lanes.

Two lawsuits challenge the toll increase, on the basis that it amounted to a tax, not a fee, and therefore required two-thirds majority to pass. RM3 was approved by 55% percent of voters across all nine Bay Area counties. The Bay Area Toll Authority has decided to collect increased tolls, but hold the money in escrow until the lawsuits are resolved.