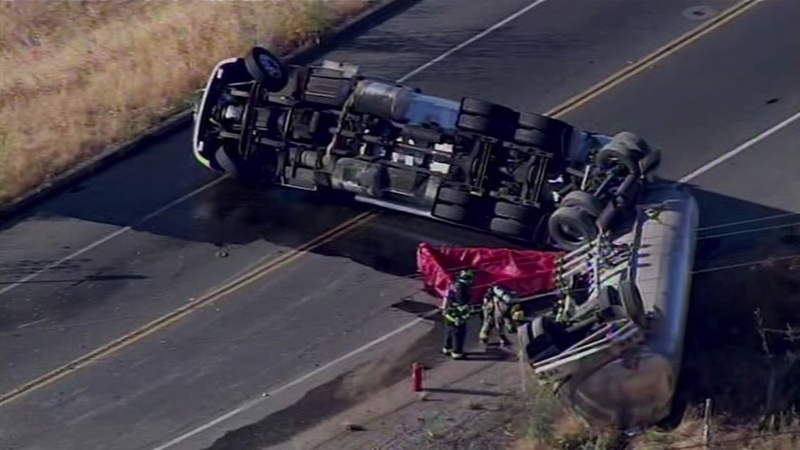 SAN RAFAEL, Calif. -- A big-rig containing two gasoline tank trailers overturned on Sir Francis Drake Boulevard near San Quentin State Prison in Marin County Monday morning when the right tires on one of the trailers went onto the soft right shoulder of the road and slid out, a California Highway Patrol officer said.

The driver of the big-rig, Christopher Knight, 30, of Sacramento, tried to recover the sliding trailer but completely lost control and crashed around 7 a.m. near the prison, CHP Officer Andrew Barclay said.

The crash occurred when the truck and trailers were traveling west on Sir Francis Drake Boulevard and rolled onto their right sides, then slid across the eastbound lane. The truck and first trailer remained on their right side, but the rear trailer continued to roll and landed mostly on its roof, Barclay said.

At least 4,000 gallons of fuel spilled from the big-rig. The CHP originally estimated that 1,700 gallons had spilled. Knight was not injured and was able to free himself from the truck. No other vehicles were involved in the crash, Barclay said.

None of the fuel spilled into the bay thanks to containment by the San Quentin Fire Department. Ten homes were evacuated in the village below, along with 40 people.

PG&E shut off power in the area, including power to homes that were evacuated in the prison complex on Valley Way, San Rafael Fire Chief Chris Gray said.

A 1,000-foot exclusion zone was established around the spill, including the 10 evacuated homes in San Quentin Village, Barclay said.

A second big-rig with two empty tank trailers responded to remove the spilled gas and unload the gas from the intact front tanker of the overturned big-rig, Barclay said.

A hazardous materials team will then determine the ensuing cleanup procedures, he said.

The rear trailer may have leaked all of its contents. Much of the gas was contained in dams and is being removed by pumps, Barclay said.

San Rafael firefighters created a primary containment area around the tank and a secondary containment on the road and adjacent to the road to capture leaking fuel, Gray said.

Crews also used absorbent material and sand that was brought to the scene, Gray said.

Vacuum trucks were brought in to remove the contained fuel on the ground and to transfer the fuel from the overturned truck, Gray said.

The California Department of Fish and Wildlife, the U.S. Coast Guard, the Central Marin and San Rafael police department, the Marin County Sheriff's Office, the Larkspur Fire Department and the Marin County hazardous materials team all responded to the scene.