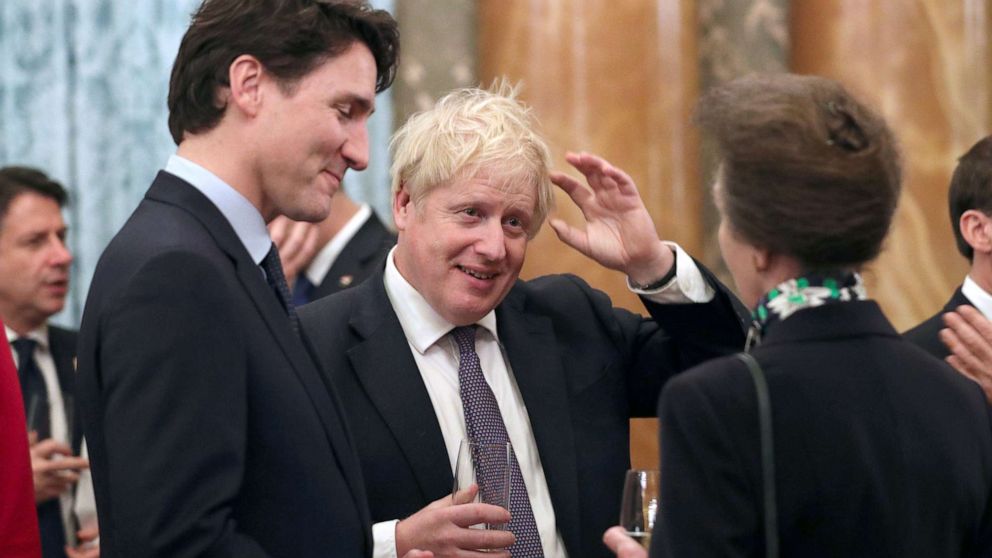 ABCNews
By JORDYN PHELPS
A candid moment caught on camera of Canada's Prime Minister Justin Trudeau casually chatting with other world leaders has stirred speculation that the Canadian leader was mocking President Donald Trump, who in response called the Canadian leader "two-faced."

In video of a conversation with French President Emanuel Macron, British Prime Minister Boris Johnson and Dutch Prime Minister Mark Rutte during a reception Tuesday evening at Buckingham Palace, Johnson can be heard asking Macron, "Is that why you were late?"

Macron's response is inaudible on the video, but Trudeau then chimes in with a remark.

"He was late because he takes a 40-minute press conference off the top," Trudeau says.

It is not clear who Trudeau is referring to, and Trump's name is never specifically mentioned throughout the video of the captured conversation.

Trudeau can later be heard saying, "You just watched his team's jaws drop to the floor."

Asked by ABC News if Trudeau was referring to Trump and to what the prime minister was discussing, Trudeau's office declined to comment.

On Wednesday morning, when a reporter asked Trump about the video, Trump called Trudeau "two-faced."

But then he added: "And honestly with Trudeau, he's a nice guy, I find him to be a very nice guy."

Trump said that he had "called him out on the fact that" Canada is spending less than 2% of its GDP on defense, to which NATO leaders had agreed and which Trump has made a signature issue.

But as he sat next to Trudeau in front of reporters on Tuesday, Trump was asked if he was "happy with Canadian defense spending as it is right now," and said he was "satisfied" with Canada's increased levels of spending.