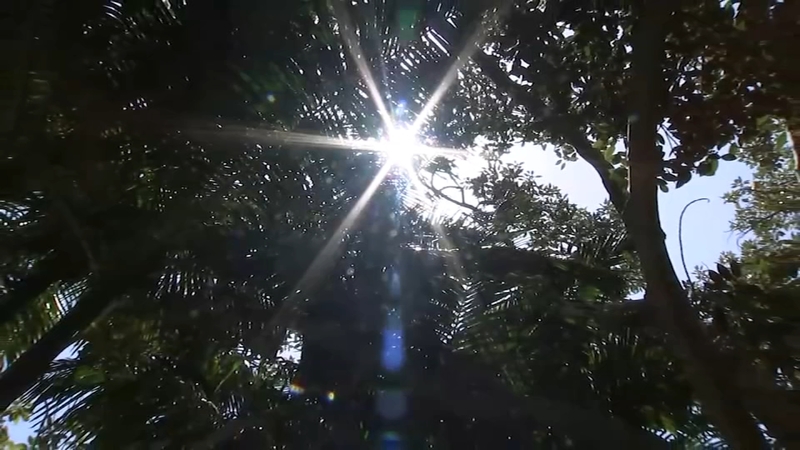 SAN FRANCISCO (KGO) -- It may be the same sun beating down on the Bay Area, but the surface temperature it triggers during a heat wave can vary dramatically neighborhood by neighborhood. A big reason for the difference is shade and the canopy of trees that line some sidewalks but not others.

"It's a clear pattern where you can see some neighborhoods, especially the richer and whiter ones have a lot of beautiful trees, and in other neighborhoods there's barely any at all," explains National Geographic environmental reporter Alejandra Borunda.

RELATED: Climate Watch Resources: How to be ready for wildfires, heat waves, drought and power outages

While she focused on Southern California, ABC7's data journalism team analyzed data from the California Health Places Index, which turned up similar divides in the Bay Area. Tree canopy density ranged from roughly 5% in neighborhoods with average incomes of $40,000 or less to nearly triple that at $120,000 and up.

The problem isn't limited to one or two neighborhoods. Looking at any part of the Bay Area, one can find similar differences in tree cover. As we discovered during a quick driving tour, often the dividing line is as clear as a freeway.

In Oakland, we started in a dense, predominantly less white neighborhood near Lake Merritt and watched as sparse tree cover steadily gave way to lush green yards as we passed under Interstate 580 toward statistically whiter neighborhoods near the Oakland Hills. The difference is easily noticeable by drone.

Central San Jose has the same pattern as you pass from older tree-lined streets over Highway 101 into less affluent neighborhoods, as does cruising University Avenue in Palo Alto, also past 101, into the sparser blocks of East Palo Alto.

Researchers like Dr. Laura Feinstein of the nonprofit SPUR say when it comes to trees, the roots of the disparity stretch back decades.

"So there were a lot of factors at play," she says. "Part of it was that banks strategically decided not to lend mortgages in areas that had a high number of African American and immigrant families. So they would only lend mortgages to people who were white and wealthier."

In addition, according to Feinstein, wealthier areas zoned for single-family homes typically attracted more city services, like wide sidewalks and trees. Fast forward to the present day and that disparity becomes more than a matter of aesthetics. Experts say shade and water evaporation from trees can lower surrounding air temperatures by six degrees or more.

And while it may seem obvious that shade from a tree canopy will help keep the ground temperatures cooler, as climate change continues to affect the Bay Area, the stakes are likely to get higher. And some believe that in certain cases that shade could be the difference between life and death.

"People die during heat waves," says Dr. Feinstein. "Not young healthy people but elderly people and disabled people. And we can see that just an extra degree during a heat wave increase mortality 2-3 percent."

"We've seen here that some of the hottest years, the seven hottest on record have happened in the last seven years since 2014, so that's incredible what we're seeing," he added. "And these heat waves are becoming more dangerous."

But while the threat is growing, so is local action. Urban Forester Uriel Hernandez has been organizing tree plantings for the group, Canopy, in East Palo Alto, where concerned neighbors joined in.

"Just because of the history of disenfranchisement here there's definitely been a pushback," says Hernandez.

"I think we got a lot of response. People were really, really, interested in getting trees for their houses," he says.

Meanwhile, nonprofits like SPUR and the San Francisco Estuary Institute have produced detailed roadmaps for greening programs in partnership with Santa Clara Valley Open Space Authority and elsewhere. Groups like Save the Bay have also been active in lobbying for tree planting, citing its benefits for the Bay shoreline. Most counties around the Bay Area have also prioritized greening efforts over the last decade.