Some pretty cool science is gonna happen during the solar eclipse 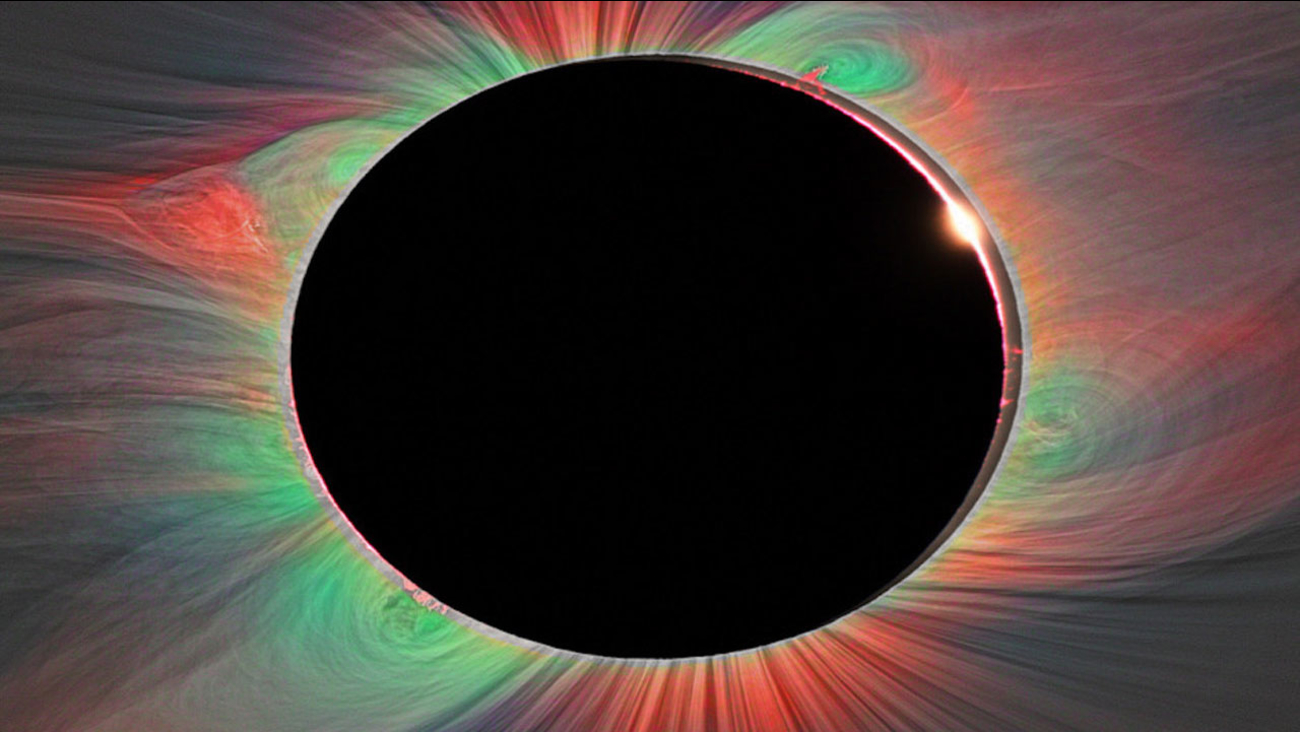 Total solar eclipses are the only time that the sun's corona - the gaseous outer ring of the sun - is visible to the naked eye on Earth. (S. HABBAL / M. DRUCKMÜLLER)

This story originally appeared on FiveThirtyEight and is reprinted with permission.

On Aug. 21, mid-morning Pacific time, the town of Salem, Oregon, will slip into shadow. The moon will slowly and inexorably slide in front of the sun, and our star's light will slowly grow dimmer. Filtered through foliage, sunlight will appear on the ground as a smattering of crescents.

As more of the sun's disk disappears, ripples of light and darkness called "shadow bands" will wiggle across the ground, the way sunlight seems to shimmy on the bottom of a swimming pool. They are a harbinger of the coming total eclipse. Birds will hasten back to roosts.

Then, at 10:15 a.m., in one of the most unusual coincidences in all of celestial mechanics, the moon will completely block the sun's disk. In the final seconds, a dazzling ray of light, known as the diamond ring, will remain: It is sunlight filtering through valleys on the moon. Insects will thrum and chirp as if it's dusk. The temperature will drop.

At once, the Oregon landscape will be drained of color. Only the sun's atmosphere, called the corona, will be visible, appearing as a ghostly wreath of light licked by flames of pink and red. Only during totality can you see these tendrils, which reach Earth and affect our daily lives as much as any part of our star. The sky will seem to dance, four other planets will emerge from their daytime hiding spots behind the sun's glare, and millions of Americans will experience their first total solar eclipse.

Jay Pasachoff will experience his 34th. He is an astronomy professor at Williams College in Williamstown, Massachusetts - and the man who may have seen more eclipses than any human in history. For his first, he was a freshman at Harvard who lucked into a seat on a Northeast Airlines jet flying over Boston in 1959. For the Aug. 21 eclipse, he will be in Salem, probably behind his 500mm Nikon lens, photographing the corona once more.

"There is something primal about being outside when, over a period of less than an hour, it gets dark, the light gets very eerie, the colors change. You know that something strange is going on," Pasachoff said recently. "Then, abruptly, it gets 10,000 times darker in the last minute. You look in the sky, and there's this strange stuff going on. There's a diamond ring surrounding this dark hole in the sky. Everybody who sees it is overwhelmed."

The eclipse will be a moment of immense national interest. For astronomers like Pasachoff, it will also be a moment of immensely important science. This will be the first total eclipse to cross the continental United States since 1918, and the first to touch any part of the U.S. since 1979. Its "path of totality" - the narrow zone where the moon completely blocks the sun and casts a shadow over the land - will make landfall exclusively within the United States. This is the first eclipse to do so since 1776. Millions of people live in the path of totality; Americans in every state, including Alaska and Hawaii, will be able to see at least a partial eclipse.

All the while, scientists who study eclipses will be buzzing around their equipment to take the measure of the sun, its atmosphere and its interaction with our own atmosphere. An event that could inspire a unique sense of cosmic communion will also answer burning questions about how our star works and how it affects us.

"Think about being able to do all these experiments on the ground, from airplanes, from balloons, with citizen scientists. It's pretty breathtaking," said Lika Guhathakurta, an astrophysicist at NASA. Guhathakurta will shepherd dozens of scientific projects on Aug. 21, including polarized images of the corona, which help scientists measure its temperature; measurements of Earth's ionosphere - the charged layer of the atmosphere that gives us auroras; spatial disturbances in the atmosphere caused by heat changes; and a whole lot more. (You can get involved, too. With an app called GLOBE Observer and a thermometer, you can collect data during the eclipse and submit it to NASA. And Google and the University of California, Berkeley, are asking for video and images, which they'll stitch together into an "Eclipse Megamovie.") Other scientists will be studying animals - creatures as small as grasshoppers and as big as hippos have been documented reacting to eclipses - and us, too. Humans are sure to have a wide range of responses, as we have since time immemorial.

"These are really big-picture questions, and nature is making it possible for us to study them," Guhathakurta said.

In this case, nature has made it so the moon and sun appear to be the same size in the sky. The moon is about 400 times smaller than the sun, but the sun is about 400 times farther away, so they line up almost exactly.
By blocking the sun's blazing light, the moon unveils the solar corona, a region that scientists still struggle to understand. The sun streams radiation and charged particles through a wind that it constantly blows in all directions, and while we know the solar wind originates in the corona, scientists are not sure exactly how, or why. Together with Earth's atmosphere and magnetic field, the solar wind is responsible for producing auroras and "space weather," geomagnetic disturbances that can wreak havoc on satellites, communications and the power grid. An eclipse is one of the only times scientists can see the corona itself - and try to understand what it is throwing at us.

With new corona observations, scientists can feed new bits into computer simulations hungry for data on coronal action. This will improve models used for predicting space weather, said Ramon Lopez, a physicist at the University of Texas at Arlington.

Scientists who want to learn more about the corona can block the sun without the moon's help, but the instruments that do this are imperfect. A coronagraph on a telescope can block the solar disk, literally by placing a circular filter over the image of the sun to turn off part of its light. But this can't mirror what the moon does naturally.

"We can't get as close to the visible solar surface as the moon-Earth-sun system does. We don't have the ability to make the optics work," said C. Alex Young, a heliophysicist at NASA.

What's more, coronagraphs, by definition, filter sunlight and block part of it out. This means scientists don't have good views of the sun across the whole spectrum of light it emits. Plus, coronagraphs usually block more of the sun than astronomers would like. Typically, a coronagraph covers an area around 1.4 times the radius of the sun, obscuring arguably the most important region - the one closest to the sun's surface.

"That is sort of the missing link, the region where space weather is formed, where the corona gets heated, where the solar wind gets accelerated. ... So that's where we want observations to be pristine," Guhathakurta said.

Scientists hope their findings will help to solve a few perplexing problems. The corona burns at more than 1 million degrees Celsius, while its surface is 6,000 degrees Celsius; why, scientists wonder, would its atmosphere be hotter? This is as if a fire were scorching at its outermost edges and tepid within. The coronal heating problem is one reason astronomers are so fired up for this eclipse. Scientific instruments can observe coronal structures, measure material escaping from the sun at speeds of 1,000 miles per second, and capture instabilities in the sun's plasma and magnetism that would otherwise be outshone.

Scientists will scramble to study all this as the shadow of the moon races across the country at an average speed of 1,651 mph. Scientists and students at 25 locations across the country will launch more than 50 weather balloons, which will take the temperature of Earth's atmosphere. From orbit, a slew of spacecraft and the crew aboard the International Space Station will be watching and taking pictures. And scientists will fly in at least three airplanes, including a National Science Foundation jet that will measure the sun in infrared.

Next year, NASA will launch a spacecraft called the Parker Solar Probe, which will sidle up to the corona's outer edges with a bunch of instruments. But until it reaches the sun in a few years, an eclipse offers the most intimate possible window into the star's behavior.

"We're studying the magnetic field in a region of the sun that we can't see otherwise, and it's different every time," Pasachoff said.

Pasachoff is traveling to Salem with eight undergraduate students, 16 of his former students, 10 scientific colleagues and 12 other astronomers, all of whom will be making scientific observations. He chose the site because it's high in elevation and historically likely to be dry and cloudless on Aug. 21.

"We have the latest in electronics. We have telescopes of almost every type. We are taking advantage of the logistics of this being a domestic eclipse," he said. "Asking, 'What are you going to do at the eclipse?' is like saying, 'Where are you going for your vacation?' and responding, 'the United States.' There are a million things that you can do."

After Oregon, the shadow of the moon will race southeast, carving a roughly 70-mile swath through parts of 11 other states - Idaho, Wyoming, Nebraska, Kansas, Missouri, Illinois, Kentucky, Tennessee, Georgia, North Carolina and South Carolina - before lifting in the mid-Atlantic Ocean. Millions of people live on the path of totality, and millions more live a short drive away. So as scientists scramble to make some of the most important measurements of their careers, you can step outside and watch, too.

Fred Espenak, a retired NASA astrophysicist and eclipse scientist who goes by the nickname "Mr. Eclipse," promises it will be worth it: "It is just overwhelmingly majestic. You can see photographs, you can see videos, and they help give you a little bit of an inkling of what it's like. But when they see totality, so many people go, 'Oh my god, I didn't realize it was gonna be like this.'"