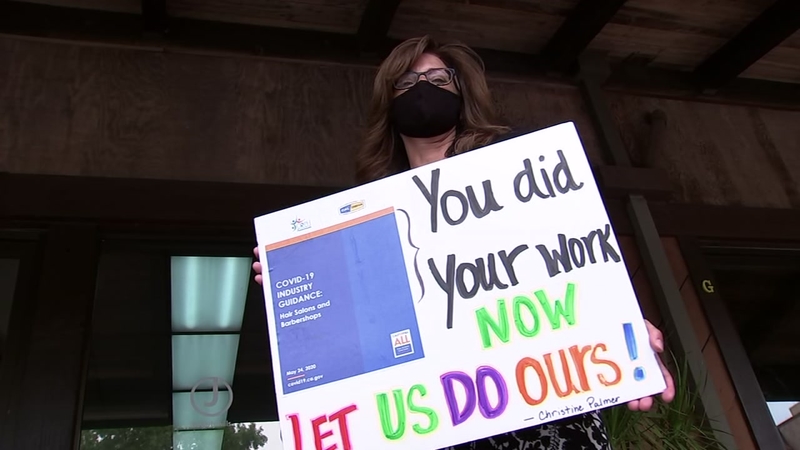 ALAMEDA COUNTY, Calif. (KGO) -- Many hair salons around the Bay Area opened in protest this week despite state and county health orders to remain closed. It was an emotional day for many.

Christine Palmer owns Flaunt Hair Designs in Pleasanton. She technically opened, but not to cut or color hair.

She explained "It's an opening. You're in here but I'm not breaking any rules to make my stand."

The stand includes fury directed at the state and counties for keeping salons closed, in many cases since March.

This is a protest, said Palmer. She went on to say, "We should be grouped with like professionals, like med spas and dentists, which are legally open rather than lumping us in with bars, restaurants and family entertainment."

California stylists are demanding their salons reopen. Hairstylists and barbers protested on Monday across from South Coast Plaza in Costa Mesa.

A Dublin salon was even visited by the police today, according to the owner, who believes someone called to complain.

"I was absolutely shocked we had a police officer come today," Carina Campo with Justin Michael Salon said. "I think people thought we would be doing services. If we had had people working or cutting hair the fine would've been $1,000," she said.

Then there were salons like reWAXation in San Francisco, that openly ignored health requirements and opened for business.

Owner Shayana Flick said "It was a matter of either re-opening against state orders or losing our business and employees having to find jobs elsewhere. It came down to a matter of just surviving."

Hair salons “open”- some to “protest”, others to see clients- as they struggle with health orders to remain closed. pic.twitter.com/4qKknPCkGJ

Some salon owners say they know of stylists re-opening "speakeasy style." They black out their windows and say they're closed, but clients are told to knock on the back door to sneak in for a haircut.

"Unfortunately, when operations are like that the doors aren't open and there's no regulation," Larry Phillips, owner of Fusion3 Salon said. "We know stylists are going into peoples homes and that's really not a controlled environment," he said.

This movement of angry stylists is called Open Safe California. Some say they intend to stay open every day this week and it remains to be seen if there will be repercussions.

Some salons are also using the social media hashtag #SaveOurSalons to speak out.