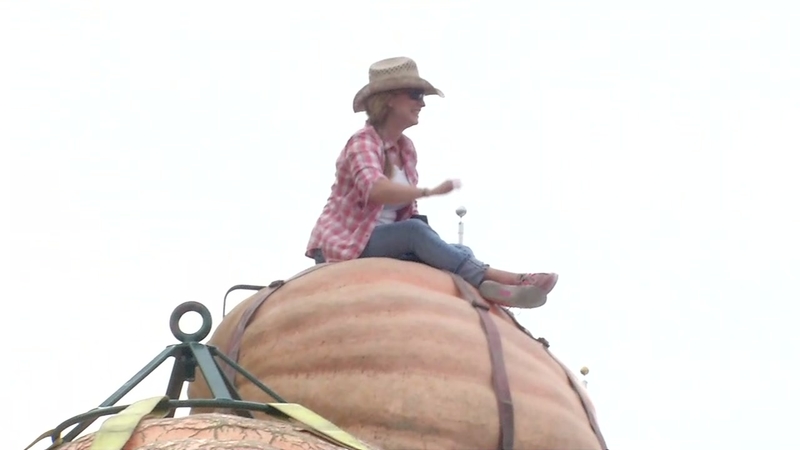 HALF MOON BAY, Calif. (KGO) -- A 1,910-pound pumpkin has won the 2016 Safeway World Championship Pumpkin Weigh-Off in Half Moon Bay. Cindy Tobeck, an elementary school teacher from Washington, grew the massive gourd. The largest California grown pumpkin weighed in at a whopping 1,723 pounds.

Organizers were hoping to see a record breaking pumpkin; the world record had been 2,232 pounds, but now a pumpkin weighing 2,624 pounds has reportedly been grown in Belgium. There was a $30,000 prize for anyone who broke the world record, Tobeck will still gets $6 a pound.


Last year, a rippled white gourd weighing in at 1,969 pounds took the title at the weigh-off. Steve Daletas of Pleasant Hill, Oregon, won first place and a check for $12,000 for the gigantic pumpkin he grew.

The champion pumpkin, along with the top five pumpkins overall, will be on display at the Half Moon Bay Art & Pumpkin Festival. For more information, click here.


Close up of most beautiful pumpkin at #HMBPumpkinFest. Humbler than I thought it would be. It even made a "bad hair day" joke. pic.twitter.com/RDmmPCZBHt

Vince Zunino wins "most beautiful pumpkin" at #HMBPumpkinFest weigh off.
On side note- I once took 2nd place in a beauty contest & won $10. pic.twitter.com/aoCOtM09AC

1st pumpkin of the day at the World Championship Pumpkin Weigh Off in Half Moon Bay.
47 pounds. #HMBPumpkinFest pic.twitter.com/eDDtq0mNlK