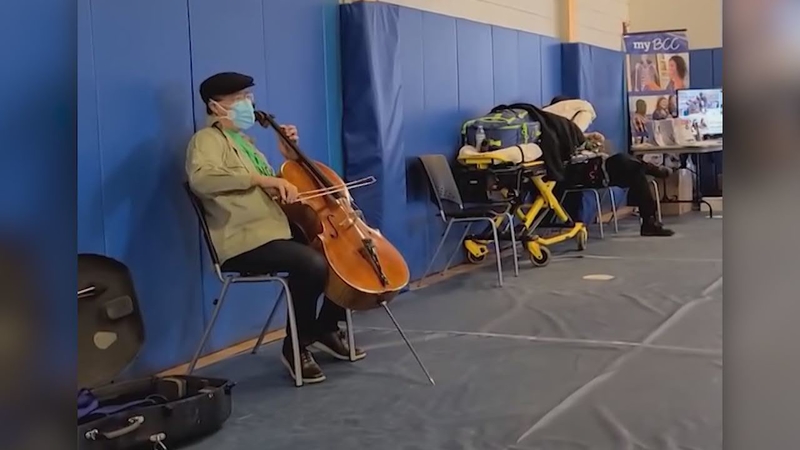 PITTSFIELD, Mass. -- Over this past year, world-renowned cellist Yo-Yo Ma has been working to provide comfort and support to those who may be struggling during the COVID-19 pandemic.

On Saturday, he transformed a Massachusetts vaccination clinic into a temporary concert hall, in a moment that residents called a symbolic representation of "the light at the end of the tunnel."

Ma, 65, received his second shot, alongside his wife, Jill Hornor, at Berkshire Community College in Pittsfield, Massachusetts, on Saturday.

When he arrived at the clinic carrying his cello, the nurse who gave him his vaccine asked whether he would be willing to use his 15-minute observation period to offer a short concert to those in the waiting area.

The famed cellist was "delighted," Richard Hall of the Berkshire COVID-19 Vaccine Collaborative, told ABC News, as he wanted to "give something back to the community."

Donning a cap and T-shirt, Ma sat masked and socially distanced from others as he played an array of classical selections, including Franz Schubert's "Ave Maria" and Johann Sebastian Bach's Cello Suite No. 1 in G Major, Prélude.

"I think that everyone there was touched just listening to him play," Hall said.

Berkshire County, Massachusetts, is known for its arts community, and after a year in which the arts have been largely silenced, "it was quite special to just listen to him play the cello," Hall said.

A year ago, when the pandemic began, Ma began an online series titled "#SongsOfComfort," in an effort to offer solace and ease anxieties "in the face of fear and isolation."

"In these days of anxiety, I wanted to find a way to continue to share some of the music that gives me comfort," Ma wrote on Twitter, exactly a year before he received his second shot.

In these days of anxiety, I wanted to find a way to continue to share some of the music that gives me comfort. The first of my #SongsOfComfort: Dvořák – "Going Home”

His social media project, which started as short, self-shot videos filmed from home, soon expanded into a worldwide effort that has reached more than 18 million people, according Ma's website.

In December, Ma and pianist Kathryn Stott released an album titled "Songs of Comfort and Hope."