Investigation reveals millions of pounds of food wasted every day 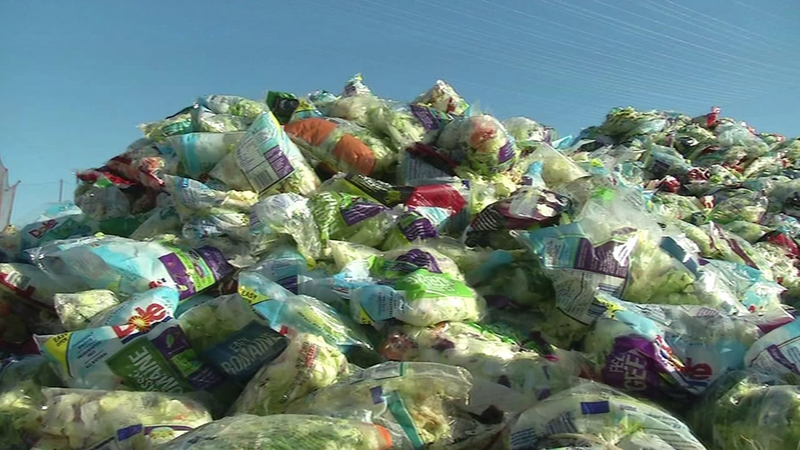 SAN FRANCISCO (KGO) -- Many may not realize it, but many people throw away more than $1,000 worth of food every year.

ABC7 News found greens that look good enough to eat just before realizing a salad bar was in a dump.

Thousands of pounds of fresh produce were found heaped high, with much of it in store-ready bags. "This load by itself is probably close to 10 tons," Salinas Valley Solid Waste Authority spokesperson Cesar Zuniga said.

Zuniga said this mountain of vegetables is just a fraction of what he sees every day at a waste processing facility in Salinas.

Gunders is the author of the Waste Free Kitchen Handbook and wrote a report for the Natural Resources Defense Council with a shocking conclusion. "Across the country we waste about 40 percent of all the food that comes into our food supply," Gunders said.

That includes food waste on farms like those scraps people leave behind at a restaurant or lettuce going bad in people's fridges and bruised or spoiled food in grocery stores.

But that doesn't include the produce supermarkets reject. The industry has very specific standards for everything from the size of a banana to the shape of a bell pepper. What doesn't make the cut, doesn't make the shelf. "Imperfect produce it certainly can't have a big nose like this," Imperfect Produce spokesperson Ben Simon said.

Huge amounts of fruits and vegetables are rejected because they're ugly. "We buy the produce from California farmers that wouldn't normally make it to grocery stores," Simon said.

Emeryville-based Imperfect Foods boxes it up and sells it to people at a big discount. "There is absolutely nothing wrong with these fruits and vegetables. They are basically the same exact quality as a normal grocery store product they are just shaped a little bit funny," Simon added.

The food industry knows it has a problem. "We were really startled to discover that the single biggest category of what is going into landfills in the U.S. is food," Food Waste Reduction Alliance Meghan Stasz said.

These numbers are just too much! Learn the startling facts about food waste: https://t.co/IVU5xvKo6N https://t.co/7j39pRgDqf

The national Food Waste Reduction Alliance is bringing together grocery manufacturers, food marketers and the food service industry to cut down food waste. One strategy is to recycle more. "We're actually diverting 93-percent of our food waste away from landfills," Stasz said.

But in Salinas, there is still plenty of waste. The lettuce looks good. Some of it was bagged and ready to go nearly two weeks from expiring. Not to mention all the water that was wasted to grow all this food.

So, why were they thrown away? Dole Foods said in a statement, "Dole disposes of approximately 20,000 pounds weekly at the Salinas waste facility. These bags are samples that we use to monitor product performance and are not intended for public consumption."

Dole did not address the lettuce not in bags.

Local food banks want to see more of these greens tossed on a table not in the trash. "We'd love to have all that we can get," said Paul Ash of the San Francisco-Marin Food Bank.

The Food Waste Reduction Alliance says its encouraging members to donate more. "Nobody likes to see food wasted, and least of all us. Because we don't see that as food waste, we see that as an opportunity to get food for low income people who need that food," Ash said.