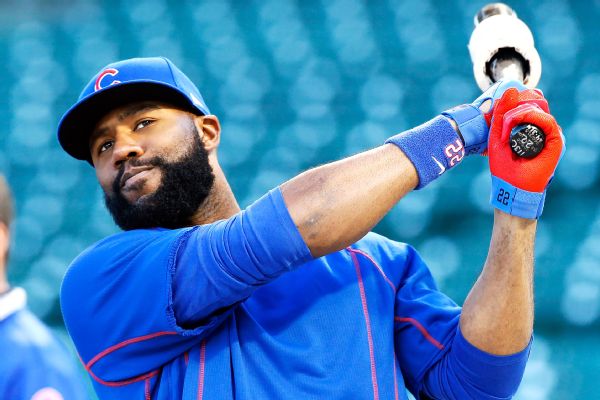 CLEVELAND -- Chicago Cubs outfielder Jason Heyward again finds himself on the bench for a World Series game as manager Joe Maddon has elected to start Jorge Soler in right field in Game 2 against the Indians on Wednesday night.

Indians manager Terry Francona more than tweaked his lineup for Game 2. Switch-hitting designated hitter Carlos Santana, who batted fifth in the opener, will lead off against Cubs right-hander Jake Arrieta. Also, Tyler Naquin will replace Rajai Davis in center field and Coco Crisp will play in left instead of Brandon Guyer.

Heyward sat in Game 1 on Tuesday as lefty Chris Coghlan played against righty Corey Kluber. This time Maddon is sitting Heyward in favor of the right-handed Soler who is 0-for-8 this postseason with two walks and three strikeouts. Heyward is hitting .071 in 28 at-bats and has been benched numerous times throughout the playoffs.

The Cubs like the matchup enough to start Soler as Bauer is tougher on lefties than righties, although Soler is not a good cold weather hitter. He's hitting .169 with a .552 OPS when the temperature is less than 50 degrees, according to ESPN Stats and Information. He's a .266 hitter with a .782 OPS when it's 50 degrees or over. The temperature is expected to be about 47 degrees at game time.

"Just give it a shot. Out of that particular position we're just looking for some production," Maddon said, adding: "If you have the opportunity to make a choice I'd rather choose the righty over the lefty."

Francona likes Santana at the top of the order because of his patience at the plate. He walked 99 times during the regular season. Santana also hit 34 home runs and has set the tone with several homers to open games.

Maddon has also elected to start righty Willson Contreras behind the plate with Arrieta on the mound. Contreras is 9 for 22 (.409) in the postseason and provides a stronger arm to negate the Indians running game.

Cleveland led the American League in stolen bases. Lefty hitter Miguel Montero had been Arrieta's quasi personal catcher for the latter portion of the season but won't start Game 2.

Kyle Schwarber is the designated hitter for the second straight night.

According to the Elias Sports Bureau, the Cubs' Game 2 lineup is the first in postseason history with six players who are 24 years old or younger: Kris Bryant, Soler, Contreras, Schwarber, Javier Baez, Addison Russell.