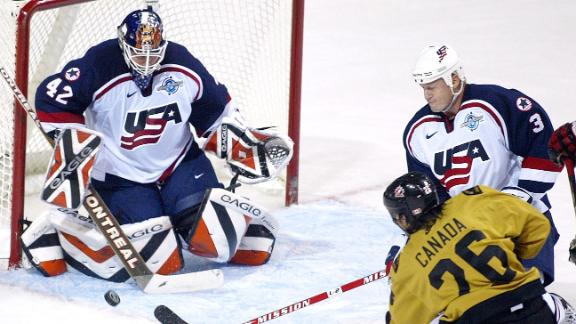 COLUMBUS, Ohio -- The newly resurrected World Cup of Hockey -- an eight-team international tournament to be held in the fall of 2016 and announced by NHL commissioner Gary Bettman on Saturday -- is a jumping-off point for an ambitious international calendar that will include an innovative Ryder Cup-style tournament featuring the best European players taking on the best North American players, sources told ESPN.com.

The 2016 World Cup of Hockey, the first incarnation of the tournament in 12 years, will feature a team of European All-Stars from countries not represented in the competition as well as a team of North Americans 23 or younger competing against hockey powers Canada, the United States, Russia, Sweden, Czech Republic and Finland.

The championship will be decided by a best-of-three finals. But the eight-team tournament to be held exclusively in Toronto with exhibition games likely held in Europe and possibly in a city such as Buffalo is a small part of a larger puzzle the NHL and the players' union hopes will dramatically improve its global profile.

In fact, the format for the 2016 World Cup with its two made-up teams is likely to be dramatically altered when the World Cup of Hockey returns four years later in 2020, sources told ESPN.com.

It's expected that the NHL and the players will have designed a qualifying format that will make the 2020 version of the World Cup of Hockey a true global tournament with teams such as Switzerland, Slovakia and Germany getting an opportunity to qualify for the big tournament in a separate event, likely held in the fall of 2019.

It's believed the league and players will develop a set of regulations more relaxed than Olympic or IIHF rules, allowing players to play on teams based on heritage, etc., and not necessarily place of birth. It's also expected the second in this reborn World Cup of Hockey rotation would include a much heavier European presence, with the qualifying events likely held the year before and some of the preliminary games in 2020 taking place in Euro hockey markets.

The league and players did not believe they had enough time to have a proper qualifying system put in place before the 2016 event. Further, with the NHL looking for broadcast partners for the World Cup of Hockey -- the event is not tied to current broadcast contracts -- it was believed crucial that as many NHL players were able to take part in the new World Cup as possible to make it more attractive to ticket-buying fans and television viewers (and broadcasters who will pay handsomely to televise the event).

Hence the two made-up teams, which would allow top players like Anze Kopitar, Zdeno Chara, Marian Hossa, Jaroslav Halak and others to take part on the Euro squad while rising stars like Nathan MacKinnon, Johnny Gaudreau and possibly star prospects Connor McDavid and Jack Eichel will have an opportunity to play for a "Young Guns" squad.

There was some thought given to adding veteran players to the youngsters' squad, but that was abandoned.

The 2016 World Cup of Hockey, coinciding with the 100th anniversary of the NHL (there was some thought given to calling this event the Centennial Cup), will be the first such event since 2004, which was held hours before the start of a lockout that scuttled the entire 2004-05 season. That event never fully captured the attention of the worldwide hockey audience and was generally treated with indifference in the United States.

It's also why the NHL and the players will have strong roles in every facet of the tournament from where teams train to designing or at least approving the design of the uniforms the teams will wear.

What is key about the 2016 World Cup event is that it is seen as a stepping-stone to other international events, including what could be a fascinating Ryder Cup-style event pitting the top players in North America against the top European players in a European-based event.

The event, very tentatively slotted into the fall of 2018, would fill a void created when the NHL stopped sending teams to Europe to start the season after the start of the 2011-12 season.

The series of Premier Games that began with Anaheim and Los Angeles kicking off the 2007-08 season in London at the O2 Arena saw NHL teams travel to Stockholm, Berlin, Prague, Helsinki, St. Petersburg and other European centers over the following years, playing exhibition games against top European club teams as well as meaningful regular season games against other NHL competition.

This new event would be something on a much bigger scale that league officials and players hope will catch the eye of hockey fans all over the globe. The idea is to have a multiple-game competition pitting the best European players against the best from North America.

Given time constraints, the event would likely be a best-of-three or best-of-five series as opposed to best-of-seven.

The initial event would likely be held in London or Berlin, which both happen to have arenas owned by AEG, owner of the Los Angeles Kings. The expectation for London, especially, is that its geographic location would attract hockey fans from around the world as well as create a significant worldwide television audience.