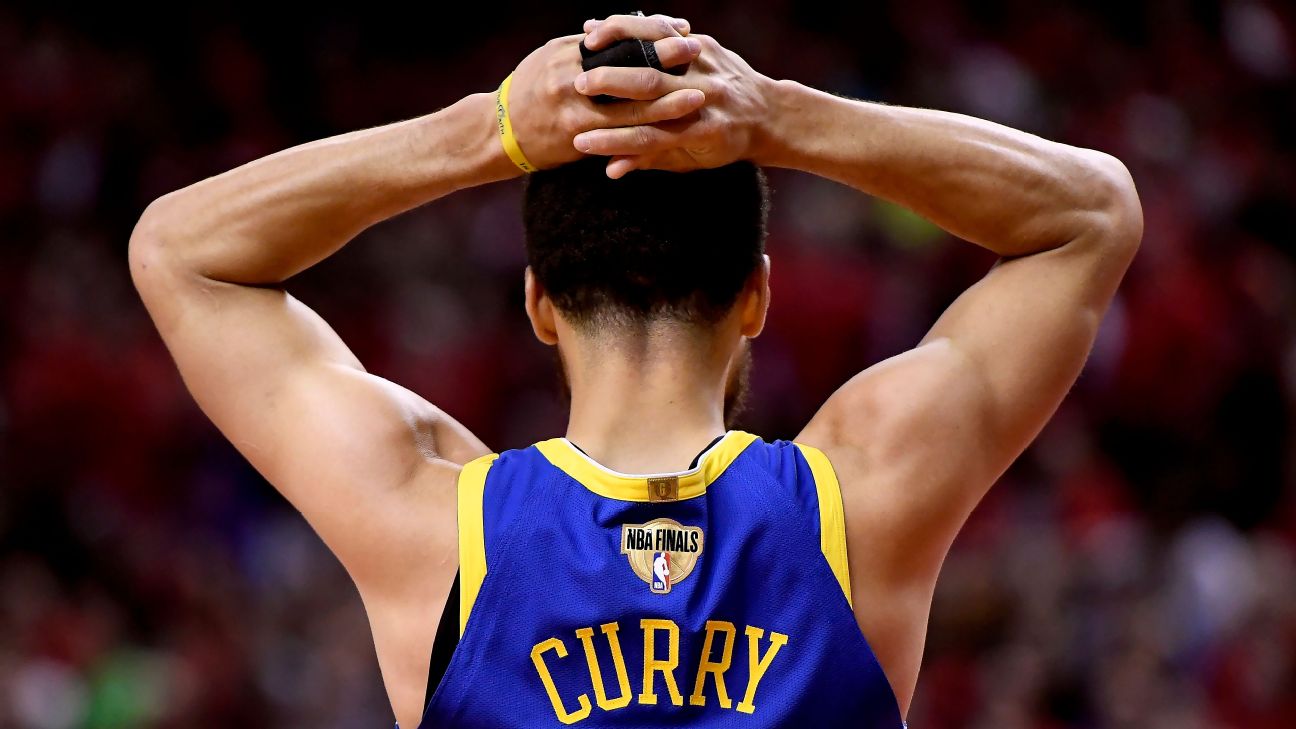 The 35-year-old swingman, who has been dealing with the injury throughout most of the Golden State Warriors' postseason run, spends the moments following Game 2 of the NBA Finals limping through the locker room inside Scotiabank Arena. Iguodala peels off his jersey and tells the assembled media what continues to motivate him to play through injuries at the tail end of a 15-year career.

"I like Steph," Iguodala says. "He's a good dude, good guy to be around. That's really the only reason why I like playing basketball."

In this moment, Iguodala's motive is far deeper than the joy he gets from playing alongside Stephen Curry; he is also determined to bolster Curry's individual résumé. Coincidentally, that means getting Curry something Iguodala already has: an NBA Finals MVP award.

"I've never seen a person, such a good person, ever get some backlash, whatever, from his peers," Iguodala said. "Because they're so jealous of what he has. ... So whatever it takes to protect his legacy, I'm all for it."

Since the NBA-ABA merger in 1976-77, Curry is part of a small group of players who have won both a regular-season MVP award and a title but not claimed Finals MVP. Like Curry has the past two years, David Robinson and Julius Erving played alongside another MVP (Tim Duncan and Moses Malone, respectively) when they won their titles, while Kevin Garnett was four years removed from his MVP season -- and on a different team -- when he won his lone championship.

Getting Curry off that list is on the Warriors' to-do list, not because Curry wants them to -- as Andrew Bogut put it, "It would help him solidify his place in history, but I don't think that's going to matter too much to him" -- but because he's so beloved by his teammates.

"He's been a great teammate for eight years," fellow Splash Brother Klay Thompson said before Game 2. "Even a better friend. You root for guys like Steph because he doesn't take any shortcuts. He works extremely hard. He's a family man. He's just a prime example of what you want your leader to be."

Iguodala echoed those sentiments, saying, "He's not arrogant. He doesn't go about life like a superstar. DeMarcus [Cousins] said it one day -- he was like, 'He's the most normal superstar I've ever seen.' He's like, 'This is unreal.' But it's just talk about culture. People don't understand how important that is."

Curry has played well on the game's biggest stage. He was the team's leading scorer in the 2015 Finals, averaging nearly 10 points per game more than Iguodala, who won Finals MVP. He led the Warriors in scoring again in 2016, when they lost in seven games to the Cleveland Cavaliers -- a setback Curry blames himself for.

Kevin Durant arrived that summer, and took the Finals scoring lead from Curry en route to winning each of the past two Finals MVPs. Still, Curry averaged 27.1 points per game over those two series, an increase over the 25.7 PPG he put up in the 2016-17 and 2017-18 regular seasons.

"I think if you ask him he'll take that championship and everyone being healthy," said Bogut, who was part of the Warriors' title team in 2015 and, after stints with Cleveland, Dallas and the Lakers over the past two seasons, rejoined Golden State earlier this season. "In my opinion, I don't think [winning Finals MVP] changes the direction of his career, but I guess for the media people that are out there criticizing him for not having that, it might silence them a little bit, for at least a year -- until they find something else to criticize him for."

Curry backed up Bogut's sentiments, downplaying the importance of the individual honor when compared to winning a third consecutive title.

"In the positions that we are in, that's just nitpicking at the end of the day, if I really want to cause a hissy fit about not winning the Finals MVP with all that we've experienced and all the highs that we've been to," he said. "When [Durant] won the last two, he deserved both of them. He played amazing, such consistent basketball at a high level.

"Do I feel like we win a championship without myself or with what Draymond [Green] did or Andre did? No. Everybody has a part in what we do, and whoever wins it this year, it's the same vibe."

With Durant sidelined with a strained calf, Curry entered the series as the betting favorite to win his first Finals MVP. He heads into Game 3 (Wednesday, 9 p.m. ET on ABC/WatchESPN) as the team's leading scorer with 57 points, tied with Toronto Raptors forward Kawhi Leonard for the most in the series. He has also added nine assists, eight rebounds and a series-high four steals.

And while Curry's Warriors teammates would like him to eventually take home the one major award he has yet to win, they aren't going to risk losing the series by force-feeding Curry.

To wit, his usage rate through two games in 2019 (27.1%) is actually down from the 2018 Finals (32.3%), when he was playing alongside a healthy Durant. And when the Raptors went to a box-and-one zone defense designed to slow down Curry in Game 2, he didn't attempt a single shot, choosing to trust his teammates rather than force the issue.

"Don't get me wrong, I play to play my best and to do what I need to do to help my team win, and that's never going to change," Curry said before the series. "Got to win and then let the rest take care of itself."

Curry is now facing the prospect of playing Game 3 without both Durant and Thompson, with the latter listed as questionable after straining his hamstring late in Game 2.

Add in Iguodala's various ailments, Cousins still being less than 100 percent after his surprising return from the torn quadriceps he suffered in the first round, and backup center Kevon Looney likely being out for the rest of the series, and this is probably as thin a squad as Curry has had around him at any point in this five-year playoff run.

Without Durant, the Warriors have become the first team since the 1991 Lakers to play a Finals game without their leading scorer from the regular season. Losing Thompson, should he be unable to play Game 3, would leave Golden State without its third-leading scorer as well. Durant and Thompson combined to score 3,707 points in the regular season. No other player on the Warriors' roster aside from Curry scored even 600 points this season.

With a less-accomplished player, questions might surface as to whether he could carry such a banged-up team. However, those closest to him know that Curry is at his best when people doubt his greatness. He acknowledged as much following a poor performance in Game 3 of the Western Conference semifinals against the Houston Rockets, when he scored 33 points in the second half of Game 6 after being shut out in the first half.

"I've heard a lot of noise this series, for sure," Curry said. "I'll just leave it at that. Whether it's positive, negative, whatever the case is -- I know what I'm capable of."

Curry's ability to use the criticism as fuel while simultaneously not becoming a distraction for the rest of the group is something that Warriors coach Steve Kerr and his staff have long admired about the 31-year-old superstar.

"Steph's just unselfish and all about the team," Kerr said just before the start of the Finals. "And I'm sure he would love to win Finals MVP, but he's much more about the team than he is about the individual. He's proven that over and over again. And he's been amazing throughout the playoffs and we'll just keep counting on him and relying on him and we're lucky to be able to do so."

Kerr won five championships in his playing career, and each time there was no question as to who was going to win Finals MVP. Michael Jordan won it for each of Kerr's titles with the Chicago Bulls (the last three of Jordan's six Finals MVPs overall), and Duncan took home the honors for the two titles Kerr won with the San Antonio Spurs.

Jordan is in the Hall of Fame. Duncan will almost certainly join him next year, as will Curry three years after he retires, whether he wins Finals MVP or not. But Warriors guard Shaun Livingston would like to see Curry in the company of those two, and the other legends of the game, sooner rather than later.

"It would be the pinnacle, I think," he said of Curry winning the award this year. "The ultimate kind of reward in a sense of things going full circle, if you think about it. All of his sacrifices, from his contracts, to his play with Kevin [Durant] getting here and just everything."

And while the Warriors want the award for Curry, he isn't campaigning for votes.

"Honestly, I don't need anybody's validation or praise or them to hype me up as other people in the league know who I am," Curry said. "So whatever comes with that territory, that doesn't really bother me." 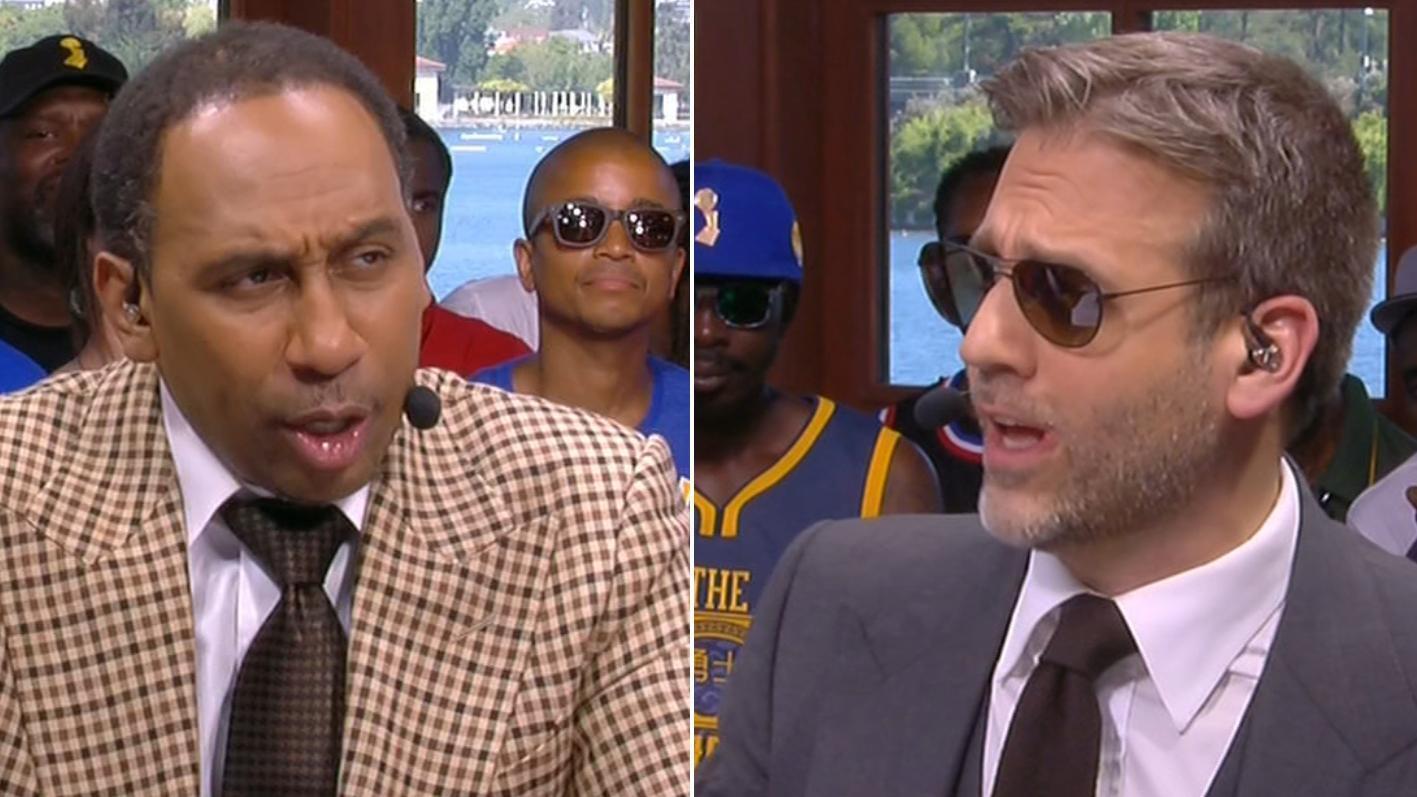