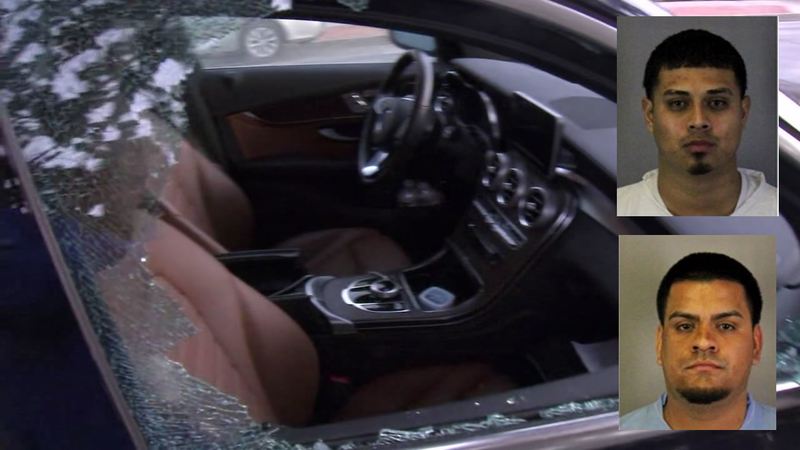 SUNNYVALE, Calif. (KGO) -- Two men have been arrested in connection to a rash of car break-ins in Sunnyvale Tuesday night, the Sunnyvale Department of Public Safety confirmed.

The DPS estimates around 40 cars were broken into all across the city, with no clear indication of where the car burglaries started.

#BREAKING @SunnyvaleDPS confirms two men from Oakland have been arrested, connected to 40 car break-ins in Sunnyvale Tuesday night. We’re told police tracked stolen property to a car in Oakland where the two suspects were arrested. More to come @abc7newsbayarea pic.twitter.com/r6vsw5h7GI

Rockefeller Road was a hot spot for the smash and grabs with at least eleven cars broken into leaving busted glass and shattered windows behind.

All of the cars had their passenger windows smashed, and in many cases, the center consoles were opened and glove boxes were visibly rummaged through.

Definitely not what you want to wake up to on a Wednesday: shattered glass & busted windows on Rockerfeller Dr in Sunnyvale. As many as 11 cars were broken into overnight near De Anza Park. It’s unclear what the thieves got away with, likely after electronics @abc7newsbayarea pic.twitter.com/x5O9BVYexq

Murillo-Rodriguez and Burgos-Vargas were arrested in a car in Oakland where the GPS location of the stolen items brought police to.
RELATED: Video shows car burglary suspects crash into parking control car in San Francisco's Cow Hollow

Police are currently investigating whether the two men arrested for the incidents Sunnyvale are possible behind a greater wave of vehicle break-ins being reported all across the Bay Area.

One victim ABC7 News spoke to said he was warned about car break-ins when he moved into an apartment complex on Rockefeller Road and is now upset that it has happened to him.

Police are now working to identify the stolen items and return them to the rightful owners.

During the holidays, Sunnyvale PD released the following tips to protect yourself from being a victim of car break-ins: