Witness describes watching car run man over as he lay in street, detained by SFPD 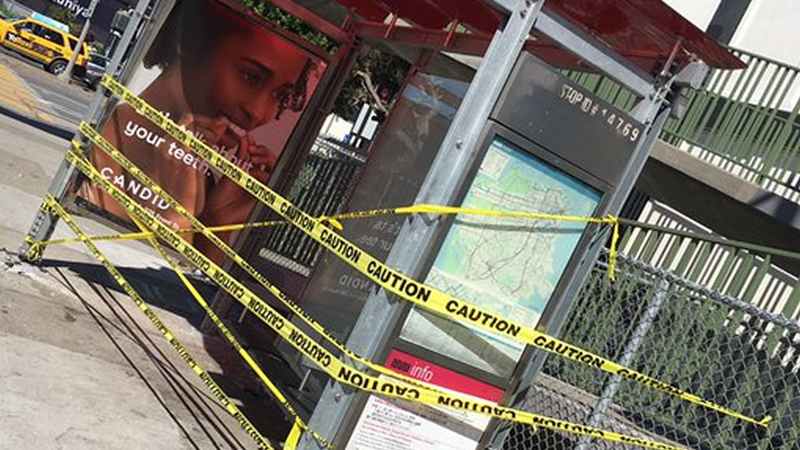 SAN FRANCISCO (KGO) -- A woman recalls the moment she watched a car run a man over as he lay in the street, detained by police.

"You're just in shock as to what you're seeing," says Joy. "It just seemed pretty horrible."

San Francisco police say that car was an unmarked police vehicle driven by another officer called in for backup. It happened Saturday at Geary Boulevard and Webster Street. Police were chasing a man believed to be involved in an auto burglary.

Joy told ABC7 News she was walking along Geary Boulevard Saturday afternoon with her fiancé when she saw a plainclothes officer chase a man, catch him, then pin him to the ground.

"And I remember that moment because my fiancé next to me said, 'Boom, down he goes,'" Joy says.

VIDEO: Crews removing the bus stop damaged when an unmarked police vehicle jumped the curb, hitting another officer and the suspect he was detaining. Just talked with a woman who saw it all. I’ll be on @abc7newsbayarea at 5 with what she said. pic.twitter.com/ULdb79IbfV

She didn't expect what happened next.

"And then you know, sort of out of nowhere, this other vehicle just drives up jumps a curb slams into the bus station and essentially runs over I think the two people on the ground," Joy says. "You heard and saw just the smashing. It's not something you just want to see any day."

She didn't know that car was being driven by another officer. In shock, she watched as officers tried to free the suspect.

"A police officer... one of them came up pretty close to the person and sort of grabbed him by his arm and dragged him out from under the car somehow," Joy says.

Crews removed the bus stop, damaged when that car jumped the curb. It was all caught on this camera, managed by the Japantown Community Benefit District. They told us they'd turned the footage over to San Francisco police.

I’m @ the bus stop on Geary and Webster where @SFPD says an unmarked police car called in for backup hit an officer and suspect. Suspect in life-threatening condition. The video here: https://t.co/iSFcZi7b8R @abc7newsbayarea pic.twitter.com/o0SQETw2dv

I asked about these two surveillance cams on the corner where the crash happened. One, owned by a business, wasn’t working. The other is operated by the Japantown Community Benefit District. No word from them yet. @abc7newsbayarea pic.twitter.com/78mRPNgI9h