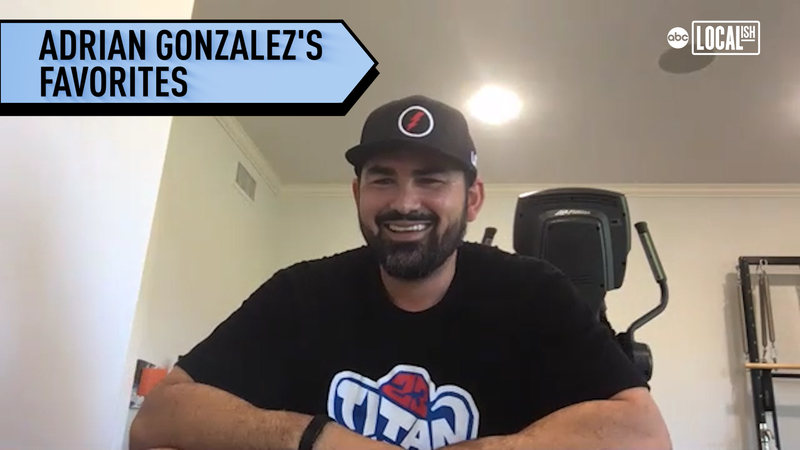 LA JOLLA -- Former Dodgers slugger Adrian Gonzalez has been dealing with the pandemic pretty much like the rest of us. Trying to stay healthy, eating his favorite take-out, and trying to keep his daughters entertained at home.
Although, he admits that he has stayed busy during the past year with his many business ventures.

"We've been so busy with our businesses," says Gonzalez. "My wife with Mia Becar, and myself with the Jersey Mike stores, Calidad, and I launched my cigar line."

Of course, he is referring to the many Jersey Mikes sandwich stores he owns, Calidad Beer, which he is an investor, and his new cigar line El Titan, which is also one of his nicknames as an MLB all-star.

Gonzalez was also happy to discuss his favorite take-out spots in Los Angeles, and how he enjoys walking on the beaches of La Jolla with his wife and two daughters.

"We did a lot of Izakaya, and Sugarfish. I'm a big Sushi fan," says Gonzalez. "One thing I will say from my playing days is don't eat sushi in Pittsburgh!"

During the height of his playing career, and even now, Gonzalez has always tried to stay on the forefront of fitness. Trying everything that can help him mitigate the injuries that plagued the backend of his career.

That's when he decided to partner with LIT Method, which is a new at-home fitness machine.

"I'm always interested in new workout techniques," Gonzalez told Localish. "So when LIT was introduced to me it was interesting. Anything that can keep stress away from your joints, from your knees, from your hips, from you back, and still be a great workout."

Gonzalez and Lit Method founder, Justin Norris, also used the opportunity to give back by hosting a virtual workout class together where they gave away a free machine. All the entry donations would be given to the World Central Kitchen to help combat food insecurity and support relief efforts in Texas.

"During my whole career, my wife and I have always been about giving back. And so for us, whenever we can partner and do something great for the community, for people that are in need, excuse my pun, but that's a homerun."
Report a correction or typo
Related topics:
los angelesfitnesskabcfoodcommunitylocalishlos angeles dodgersculture
LOCALISH
'O Little Town of Bethlehem' Christmas carol has origins in Philly
Lincoln Tunnel Motel finds TikTok fame for helping those in need
Got dry winter skin and chapped lips? Here's how you can find relief
Up, Up and Away: Soar across the Coachella Valley
TOP STORIES
Bay Area native killed after man pushes her in front of NY train
Local Native Americans oppose replica mission bell installation
Customers wait 7+ days to get COVID test results from local company
A look back at Dr. King's visits, impact in the Bay Area
Fight for equal access to vote continues on MLK Day
Candle test helps show when face masks aren't doing their job
Pleasant Hill seek help finding missing 15-year-old boy
Show More
VIDEO: Drivers spin donuts on Oakland freeway during sideshow
Could CA see more tsunami threats from submarine volcanoes?
Woman killed after being pushed in front of NYC subway train
Student sickout may force school closures in Oakland
Here's why teens 12-17 have the highest COVID rate in SF
More TOP STORIES News