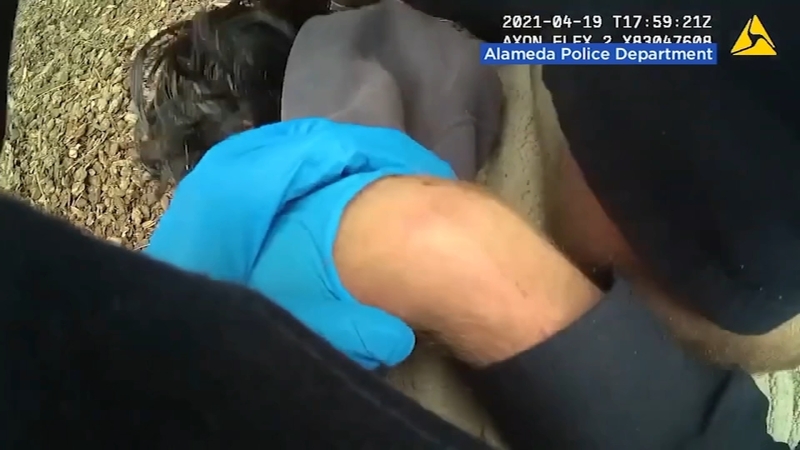 ALAMEDA, Calif. (KGO) -- Alameda County has placed three officers on leave Wednesday after body camera footage released this week shows them kneeing a man to the ground moments before he died.

WARNING: The video posted above may be hard to watch.

"Ahhh stop," said Gonzalez as he was struggling to breathe. "Please, please stop."

26-year-old Mario Gonzalez died last Monday after police responded to a call about a disorderly and possibly intoxicated person. After getting out of their patrol car, the officers talked with Gonzalez for roughly 12 minutes, asking general questions about his identity before forcing him to the ground.

Gonzalez laid face first on the pavement as two officers weighed him down with their knee and arm as he tried to answer questions.

He was forced to the ground for about six minutes and 17 seconds before he died.

ABC7 spoke with Cara Hoepner, a nurse practitioner who specializes in integrative psychiatry. For the past 17 years, she's treated thousands of patients in the Bay Area struggling with mental health issues including, trauma, anxiety, and substance abuse.

Stephanie: "What was your initial reaction after watching that video?"

Cara: "I was having a hard time believing I had seen it. There wasn't anything there that was telling me this person should have been put on the ground."

"That taking to the ground... didn't have to happen," he said.

Williams runs a firm that specializes in analyzing police use of force and wrongful convictions.

"They stayed on his back," he said. "They escalated something that didn't need to be escalated."

Williams has responded to a 'countless' number of mental health calls throughout his career. He says these officers had several opportunities to avoid this situation.

"Everything doesn't have to be a wrestling match," he said. "Time is on your side, get a supervisor there with the proper resources and you wouldn't see what you saw."

Stephanie: "Do you think police should stop responding to mental health calls?"

Timothy: "I think police should respond with appropriate personnel and once safety is established you let the experts take over and handle the case... to the level where law enforcement is not."

Williams felt strongly the officer who asked if Gonzalez should be turned over should have been proactive anyway, as that could have saved his life.

As Hoepner pointed out, unnecessary aggression is never the answer.

"They didn't know anything about him medically," she said. "He could have a cardiac condition, he could have had any number of things going on that would have made it very dangerous for him to be on the ground."

A civilian parking enforcement employee named Charlie Clemens was also involved and is currently on leave, the city confirms

The toxicology and autopsy reports will be released within three to six weeks. The ABC7 I-Team has requested if any of those officers had previous complaints of misconduct.