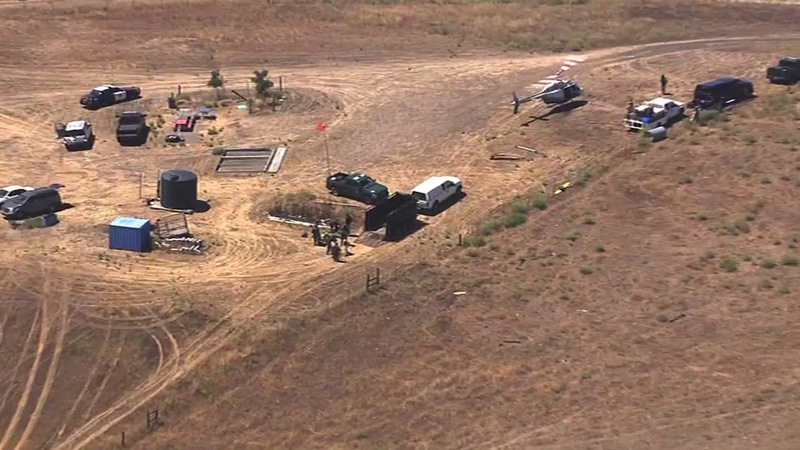 SAN JOSE -- One man has been arrested and two other men are at-large, after they were found near an illegal marijuana grow in the foothills east of San Jose's Alum Rock Park Friday, a sheriff's spokesman said.

Around 7 a.m., members of the sheriff's Marijuana Eradication Team were in the foothills where they planned to eradicate the illegal grow, sheriff's Sgt. James Jensen said.

Even by Santa Clara County standards, it was a big pot bust. Deputies raided an illegal grow on county land and made off with 7,500 plants with a street value of $16 million.

"When they entered the marijuana grow, they found three suspects. All three suspects ran. We were able to catch one," said Sgt. James Jensen with the Santa Clara County Sheriff's office.

#spotbust SC Sheriff says such 'illegal grows' are quite common. They worry about hikers finding one by accident, angering armed growers.

Deputies called off the search for the two outstanding suspects because the search reached an area without radio reception, according to Jensen.

The outstanding suspects are described as two Hispanic men in their 20s, Jensen said.

Deputies removed the marijuana from the illegal grow site by helicopter, Jensen said.

Alum Rock Park was closed for the rest of the day, city officials announced.

The suspects, who appear to have been armed, headed in the direction of Alum Rock Park where the city operates a science summer camp for 33 kids.

#SCPOTBUST Those kids now at Prusch Park. One suspect arrested. Two at large. They left semi-automatic weapons behind.

San Jose police ordered a bus to get children out.

"They were concerned about children being in the way of a police operation," explained Stacey Hendler Ross, a spokesperson withe the Valley Transit Authority.

The kids were evacuated to nearby Prusch Park, where those kids waited for their parents to pick them up.

The Sheriff's department was frustration in not getting all of their suspects, but claim victory at least in finding the grow.