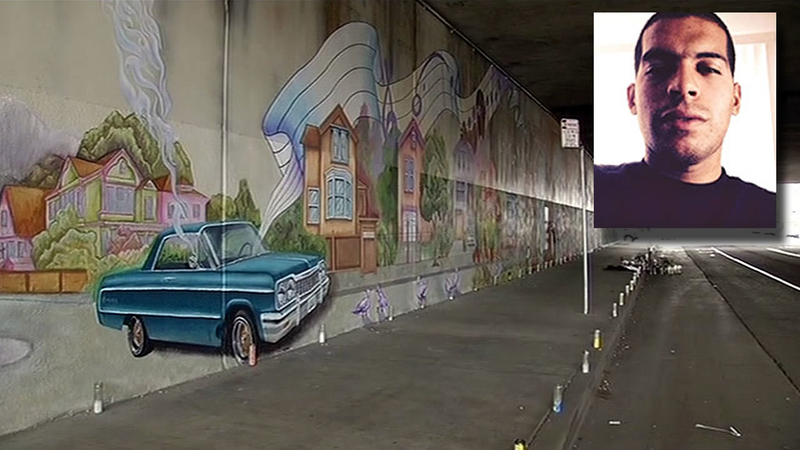 OAKLAND, Calif. (KGO) -- Oakland police announced Monday a person of interest has been arrested in connection with the murder of muralist named Antonio Ramos.

Oakland police say an arrest has been made in the murder of the man who painted this mural, Antonio Ramos. pic.twitter.com/wkaObRd3SP

After the murder, police released a surveillance photo of a person of interest, but Oakland Police Department Chief Sean Whent did not say whether that's the man they have in custody. Whent said surveillance video played a role in solving this case.

The person of interest is described as an African-American male in his 20s, approximately 6 feet tall, with a thin build and dark complexion.

Ramos was shot while working on a mural under a freeway overpass in West Oakland at 10:30 a.m. on September 29.

Officials said the artists were working on the Oakland Super Heroes Mural Project, which was being organized by ArtEsteem, the art and literacy arm of Attitudinal Healing Connection, a West Oakland Group that seeks to stop violence by inspiring people with art and education.

A memorial still stands with candles, flowers, notes and paint brushes to honor the 27 year old. Ramos' name is there along with other artists who helped finish and dedicate the piece.

Olga Moore lives nearby and like hundreds who had gathered to mourn the loss of the artist is now relieved to hear of an arrest. "Video obviously helped, some tips from the public helped as well," Whent said.

Whent said a suspect was arrested Friday night, but the identity is being withheld while the district attorney reviews the evidence. Witnesses said Ramos had exchanged a few words with the killer before he was fatally shot.

"You had someone trying to do a positive thing in the community and it was very callous the way it went down. The fact were able to get this person off the street that committed that act is important," Whent said.

"I feel so much better," one woman said.