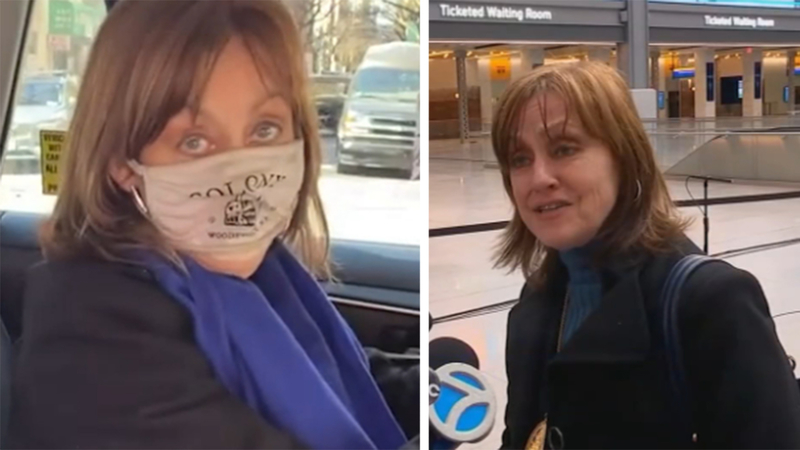 NEW YORK CITY -- The suspect wanted for an ugly, racist rant in a New York City cab has come forward, and her identity is just as shocking as the hate she spewed.

Maria Ha, 25, and 31-year-old Dan Lee say they were verbally harassed while on the street in Kips Bay and told to go back to China by an unknown woman on Sunday.
EMBED More News Videos

Maria Ha, 25, and 31-year-old Dan Lee say they were verbally harassed while on the street in Kips Bay and told to go back to China by an unknown woman.

The question so many have been asking -- where is this woman from? And who is she?

WABC-TV Eyewitness News traced her face mask back to a performing arts theater in Woodstock.

On their website, there were posts from people claiming to know the suspect, saying they "will never speak to her again."

Multiple sources close to the investigation then confirmed to Eyewitness News that it was the suspect.

By Tuesday, she had deleted her social media accounts and multiple calls and emails to her went unanswered.

RELATED | Asian grandma spit at, punched in nose in unprovoked attack in Westchester

Several family members would not put us in touch with her either. Eyewitness News even tried to reach her at her home.

It turns out she lives near where the incident occurred on Sunday, at 22nd and First Avenue.

She is neighbors with her victims, but she isn't your ordinary neighbor. Her name is Maura Moynihan, the daughter of the late Senator Daniel Patrick Moynihan.

She admitted to Eyewitness News on Wednesday that she is the woman seen in the video.

She was seen at the unveiling of the Moynihan Train Hall back in January.
EMBED More News Videos

For the MTA, the new year started off with the grand opening of the $1.6 billion Moynihan Train Hall, which will replace the old Penn Station.

In a statement, Moynihan called the dispute a misunderstanding saying, "It had nothing whatsoever to do with any bias or racism or anti-Asian American prejudice, as has been wrongly suggested."

She says it was a dispute over a cab and denied any racism was involved.

"I have devoted most of my life to working with and for Asian people, most particularly in the cause of securing basic human rights for the Tibetan people in their continuing struggle against Communist China," Moynihan said.

Yet when confronted by the victim's husband, she didn't deny hurling a racist remark.

"Just because she's done all these things in the past does not justify what she said," Lee said.

Moynihan goes on to say she would be happy to meet with the couple to explain.

"What she said wasn't an apology," Ha said. "We don't accept that behavior at all, so I don't want to meet her. Why would I meet her?"

Moynihan did not directly address the words she allegedly said in her statement.

"This is extremely hurtful," Lee said. "Like for me personally, I was born in the U.S., my entire life, and to be told to leave this country, to go back to Communist China, is seriously offensive. I was born here. This is my home."