'The Ninja Inside Me': Each section of the book represents a stage in Aroon's illness
KGO
By Spencer Christian and Juan Carlos Guerrero 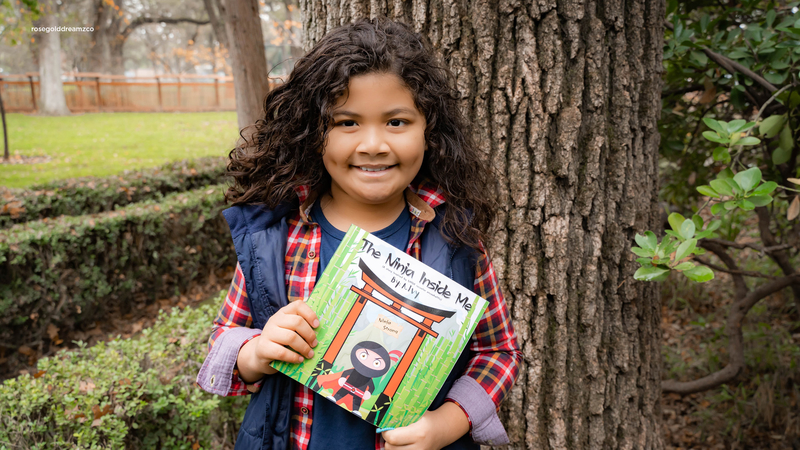 The 'ninja inside' boy with rare autoimmune disease

STOCKTON, Calif. (KGO) -- A writer's inspiration can take many forms. For Joy Van, it happened while her son was hospitalized with a rare autoimmune disease.

"I was sitting in the hospital with him one night feeling hopeless and just feeling like, 'Why is my son having to experience this?' That's when what he told me just kept coming to me," said Van.

She was referring to what her son Aroon Ivy told her a few days before being hospitalized.

He was with his family when he suddenly began attacking them.

"I went beast mode," explained Aroon, who was 5 years old at the time. His mom took him into the bathroom and put him in a warm bath to calm him down.

That's when he told her, "There was a ninja inside me that I couldn't control."

This 6-year-old boy has the biggest heart!

Van had noticed strange things happening with her son in March of 2018. Aroon had started to walk in a strange way.

That's when Van took her son to the emergency room. Then his health got worse.

"Six days after we arrived in the hospital, he became nonverbal. He was put on a feeding tube and he lost his ability to walk. He just became a vegetable in the hospital," said Van.

Aroon was diagnosed with anti-NMDA receptor encephalitis. It's an auto-immune disease that affects 1.5 million people a year.

It's caused when the body's own antibodies attack the part of the brain that controls movement, memory and learning.

RELATED: Brittany's Baskets of Hope offers support, congratulations to families of babies with Down syndrome

Doctors still don't know what causes it. Early symptoms include fever and headaches which are followed by psychosis, delusions and violent behaviors.

Aroon became violent during his hospital stay. The medical staff had to enclose him in a Posey bed and strap him down to restrain him.

That's when Van and her husband, Aaron Ivy, remembered what Aroon said a few days before he got really sick.

"He's very big with the karate. He likes Ninjago a lot. So that's how he explained it to me. 'I have a ninja inside me and he's mad,'" said Ivy.

Van got inspired. She asked the hospital staff for craft supplies and began writing and sketching a children's book about a boy ninja.

She worked on the book for a year while sitting next to her son's hospital bed.

Samantha Chavarria of Antioch got the Christmas present she'll remember for lifetime: she got Warriors vs. Lakers tickets!

It was a way for her to communicate with Aroon. Even though he could not talk, Van looked at his eyes for a response.

"He could still move his eyes. Even if it was a little blink or a little look to the left or right, I knew that he was trying to actually talk to me still," explained Van.

Each section of the book represents a stage in Aroon's illness.

When the ninja in the book can't hit a target, it symbolizes Aroon's struggles with movement. When the ninja hurts himself training with nun chucks, it represents the violent outbursts when Aroon would hurt himself.

The hope also explains the symptoms and profession of anti-NMDA receptor encephalitis. Van hopes it will help other families understand more about the disease and what to expect is someone is affected.

For Aroon's father, it was also a way of coping with the disease, which is more common among young people and children.

"It allowed our family to just express how we really truly felt emotionally," said Ivy.

About a year after he was first hospitalized, Aroon started to improve. He's now healthy and playful.

His mom credits working on the book with helping her son's brain recovery and avoid the memory problems that can develop.

The book "The Ninja Inside Me" is available on Amazon.