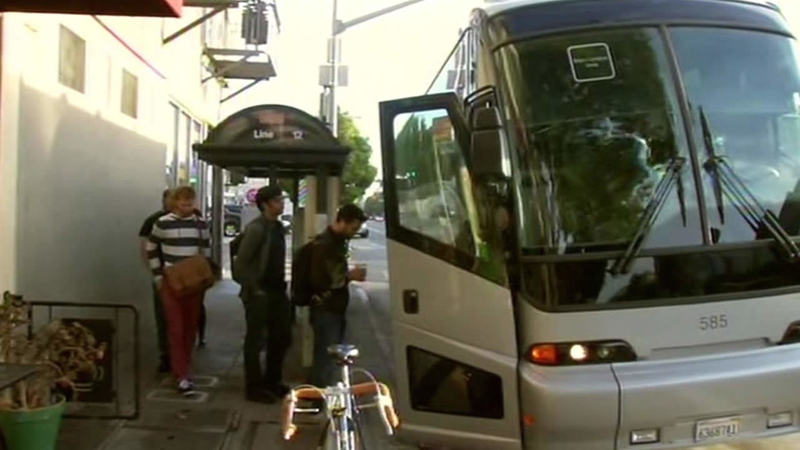 SAN FRANCISCO (KGO) -- In San Francisco, the Municipal Transportation Agency is one step closer to allowing tech buses to use Muni stops to carry workers from the city to Silicon Valley. A public hearing about this controversy became very heated on Friday.

The Muni stop at Steiner and Hayes is one of the proposed tech bus pickups for the pilot program. About 100 neighbors living around Alamo Square signed a petition saying they don't like the plan.

Love them or hate them, tech buses are part of San Francisco. For years they operated without regulations, but with more now on the streets, the city wants to reign in routes responsibly.

Tech buses currently have about 220 stops in San Francisco. The pilot program would drop that number to roughly 120.

As president of one of the tech bus companies, Gary Bauer thinks residents will notice less disruption. He said, "We're condensing the pickups down with this test."

To use curb space most efficiently, the SFMTA would extend several current Muni stops to prevent tech buses from double parking. That requires the elimination of three parking spaces and restriction of 30 others citywide.

"That represents only .01 percent of all parking in the city," said SFMTA spokesperson Peter Rose said.

On Friday in city hall, residents voiced multiple concerns saying this plan would cause more congestion and have an impact on neighborhoods.

"Everyone's concerned about pollution, actually this bus system is one of the ways San Francisco can help meet its carbon reduction goals," Adrian Covert from the Bay Area Council said.

Covert says each tech bus removes about 50 cars from the road every day. The MTA board plans to vote on the pilot program in July. It's expected to go into effect Aug. 1.

"We really did reach out to a lot of people, across the city, across the region, to make sure this works for as many people as possible," Rose said.