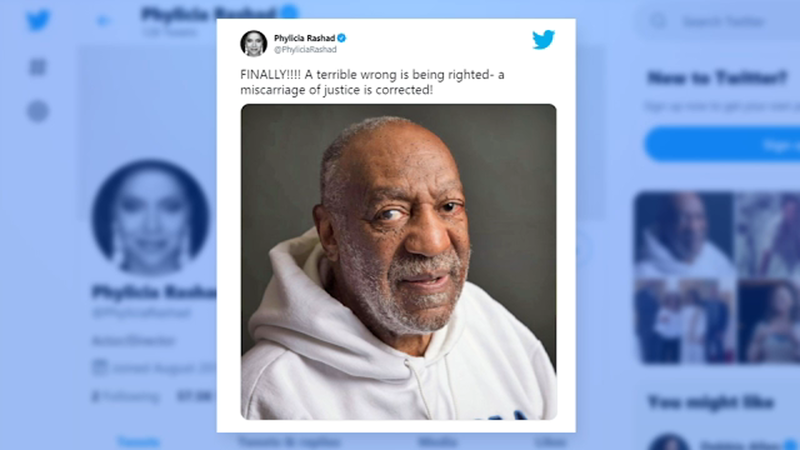 NEW YORK -- The stunning decision in the case of the man once known as "America's Dad" reverses what was the first high-profile celebrity criminal trial of the #MeToo era.

For the victims who sought closure in the resolution of the Bill Cosby case, the decision to overturn his conviction represented "a slap in the face" in the words of Lisa Bloom, the attorney for three accusers.

Marcus Solis has more on the reaction from Bill Cosby's release from prison.

Bloom said she thinks it could be "a very hard day" for the 60+ women who accused him of sexual assault.

Victoria Valentino, a Bill Cosby accuser, reacted to the news of his overturned conviction on June 30, 2021.

Another accuser, Janice Baker Kinney, said she is shocked.

"My stomach's kind of in a knot over this. Just one little legal ease can overturn this. When so many people came forward, so many women have told their truth and this serial rapist gets to go home today is just stunning to me," she said.
EMBED More News Videos

Cosby, 83, has served nearly three years of a three- to 10-year sentence after being found guilty of drugging and violating Temple University sports administrator Andrea Constand at his suburban Philadelphia home in 2004. He was the first celebrity tried and convicted in the #MeToo era.

The justices said that overturning the conviction, and barring any further prosecution, "is the only remedy that comports with society's reasonable expectations of its elected prosecutors and our criminal justice system."

As Cosby was set free from the state prison in suburban Montgomery County, his appeals lawyer, Jennifer Bonjean, said Cosby "should never have been prosecuted for these offenses."

The actor's "Cosby Show" co-star Phylicia Rashad tweeted, "FINALLY!!!! A terrible wrong is being righted - a miscarriage of justice is corrected!"

FINALLY!!!! A terrible wrong is being righted- a miscarriage of justice is corrected! pic.twitter.com/NrGUdwr23c

"I fully support survivors of sexual assault coming forward. My post was in no way intended to be insensitive to their truth. Personally, I know from friends and family that such abuse has lifelong residual effects. My heartfelt wish is for healing."

I fully support survivors of sexual assault coming forward. My post was in no way intended to be insensitive to their truth. Personally, I know from friends and family that such abuse has lifelong residual effects. My heartfelt wish is for healing.

Howard University issued its own statement in support of the accusers:

"Survivors of sexual assault will always be our priority. While Dean Rashad has acknowledged in her follow-up tweet that victims must be heard and believed, her initial tweet lacked sensitivity towards survivors of sexual assault. Personal positions of University leadership do not reflect Howard University's policies. We will continue to advocate for survivors fully and support their rights to be heard. Howard will stand with survivors and challenge systems that would deny them justice. We have full confidence that our faculty and school leadership will live up to this sacred commitment."

"I am furious to hear this news," actor Amber Tamblyn, a founder of Time's Up, an advocacy group for victims of sexual assault, said on Twitter. "I personally know women who this man drugged and raped while unconscious. Shame on the court and this decision."

Attorney Gloria Allred, who represented more than 30 of his accusers, called the decision devastating.

"My heart especially goes out to those who bravely testified in both of his criminal cases. I represented a majority of the prior bad act accusers who testified," she wrote. "Despite the Pennsylvania Supreme Court's decision, this was an important fight for justice and even though the court overturned the conviction on technical grounds, it did not vindicate Bill Cosby's conduct and should not be interpreted as a statement or a finding that he did not engage in the acts of which he has been accused."