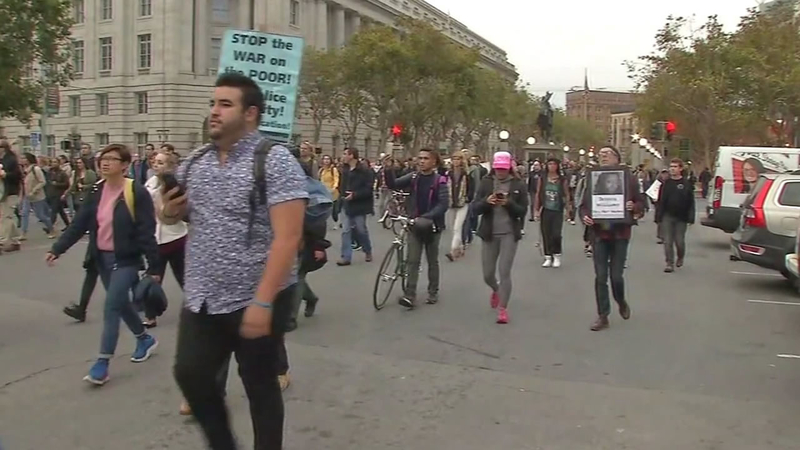 SAN FRANCISCO (KGO) -- Protests against police brutality were held on both sides of the bay. Activists hit the streets Friday night to demand justice for black men killed by officers this week.

In the wake of a sniper attack on police in Dallas Thursday night there were new precautions by San Francisco officers, like spotters with binoculars positioned on roof tops along the route.
RELATED: Obama calls Dallas shootings 'vicious, calculated, despicable

In the wake of a sniper attack on police in Dallas Thursday night there were new precautions by San Francisco officers, like spotters with binoculars positioned on roof tops along the route.

Hundreds of demonstrators arrived at San Francisco City Hall to protest police violence against black people. This is a group that was loud, but peaceful.

San Francisco sheriff's deputies had prepared for their arrival by cordoning off the entrance. The protest was in response to two high profile officer involved shootings this week.

Alton Sterling was killed in Baton Rouge, Louisiana Tuesday as he was has selling CD's on the street.

Philondo Castile was killed in St. Paul, Minn. Wednesday. He was pulled over for a broken tail light.

"All lives do matter, but at the end of the day it seems like it's Black people being killed more than any other races, every single day," said Vallejo resident Eric Green.

"It's sad that we're still having this conversation. It's sad this is still going on, and we haven't come to a point where we can just love and respect each other no matter what color or sexual orientation," said Oakland resident Sampson McCormick.

"If cops are hurting people, take away their badges, but we got to fix our justice system. You can't take out one cop, but if the justice system is fudged up, then you're just repeating the bullying," said San Francisco resident Carlos Valentino.


The demonstration started at Justin Herman Plaza on the Embarcadero. The group swelled to several hundred people at one point.

Despite the clear tension between demonstrators and the police, dozens of San Francisco police officers paralleled the large group as they marched to city hall.

Really filling up here. At 5pm the plaza was empty pic.twitter.com/J0e232DAsD

Competing with speaker on stage .. Organizers asking him to share on stage. He says "I don't need your stage." pic.twitter.com/TFKu6MrzyJ