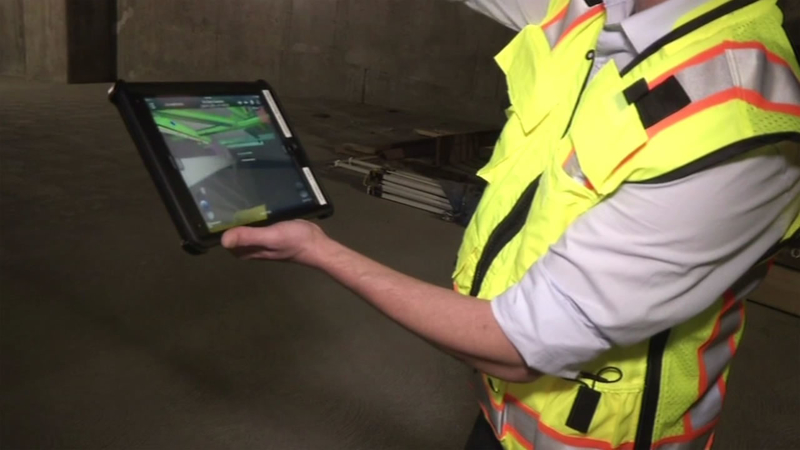 SAN FRANCISCO (KGO) -- You might never compare a construction site to an operating room. But as crews work to erect the massive new California Pacific Medical Center Hospital in San Francisco, you will find surgical precision.

Across the street, roughly a dozen engineers sit in a control room gazing into a powerful 3D version of the unfinished hospital. It's a virtual mirror of the project that changes almost hourly as crews finish the smallest details. But the idea isn't just to track the work, it's to head off trouble.

Mercado says the 3D software allows the team to search for potential conflicts in the construction that arise almost constantly.

"The team we just saw inside is reviewing and identifying over a thousand issues a week," he explains.

First it helps to understand hospitals are made up of dozens of competing systems, from specialized ventilation, to back-up power, to the structural engineering -- all being installed by different contractors. In this case, the conflict is a fire suppression system that needs to be raised closer to the ceiling to make way for cars.

"They actually requested a series of penetration through the beam and, as you see here, our structural model did not have it," Mercado says during a tour of the site.

Moments later, project manager Panos Lampsas showed us the solution. Holes added into the structural beams with a last-minute change beamed to the fabricator.

"And we were able to penetrate and prefabricate the steel before it comes to the site," Lampsas says.

Contractors brief each other daily with projections of when they'll finish a detail of the project. The software tracks the changes and plans can change on the fly.

"We constantly adjust. We actually build it virtually and then we take it to construction, so we build right out of the software," he says.

The system has worked so well that construction is running slightly ahead of schedule -- counting the days until the virtual becomes reality.