Carr Fire near Redding grows to over 80,000 acres

REDDING, Calif. (KGO) -- The Carr Fire burning in Shasta County near Redding has nearly doubled in size overnight, growing to over 80,000 acres as of Saturday morning. The fire is threatening almost 5,000 structures, according to Cal Fire. It has also prompted new mandatory evacuations.

The fire has destroyed 500 structures and damaged 75 others. 37,000 people have been forced from their homes.

Shasta County Sheriff Tom Bosenko said 14 people had been reported missing after the furious wind-driven blaze took residents by surprise and leveled several neighborhoods, though he added that the homes of most of those unaccounted for were still standing.

The fire zone stretches from Redding to French Gulch. 80,906 have burned and the fire is just 5 percent contained.

Two firefighters have died fighting the Carr Fire and three Marin County firefighters were hurt. They're now out of the hospital.

The fire that was ignited Monday in forested hills grew overnight to 127 square miles (328 square kilometers). It pushed southwest of Redding, about 250 miles (402 kilometers) north of San Francisco and the largest city in the region with about 92,000 residents, toward tiny communities of Ono, Igo and Gas Point.

It's now the largest of more than 20 fires burning in California. The winds that aided firefighters in keeping the flames from more populated areas were propelling it forward at a frightening rate.

"We're not getting a break with the weather," said Chris Anthony, a spokesman for Cal Fire, the state agency responsible for fighting wildfires. "It just continues to be really hot, really dry and we continue to get those winds. ... This fire's getting so big and there are so many different parts to it."

Click here for the latest information from Cal Fire on the incident, including updated evacuation information.

#BREAKING Worst fears realized in neighborhood outside #Keswick where #CarrFire has destroyed dozens of homes, some still smoldering. pic.twitter.com/LUvOrDqVKB

Heading to #CarrFire in Redding to report on deadly inferno that has killed two firefighters and destroyed at least 65 structures. #abc7now pic.twitter.com/yot1Kp8ObR 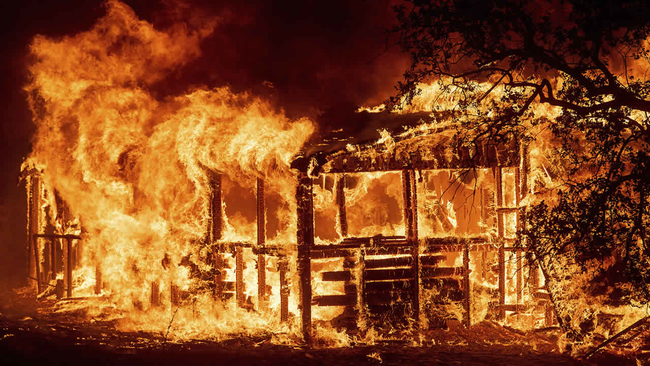