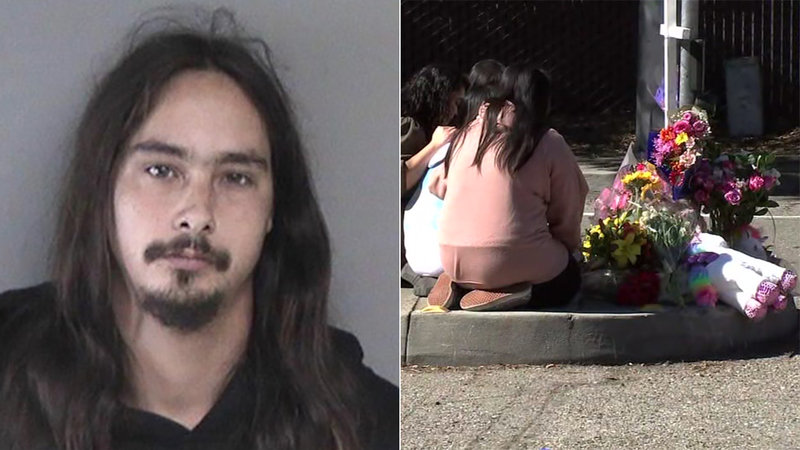 CASTRO VALLEY, Calif. (KGO) -- The man who is accused of hitting and killing a Castro Valley 12-year-old girl has bailed out of jail.

24-year-old Joshua Byrne turned himself in Tuesday morning and then posted $75,000 bail later that night. He is charged with vehicular manslaughter and hit and run. Authorities say they could see on surveillance video that the driver of the truck that hit the girl stopped and looked but then drove away.

"I was obviously heartbroken to hear it happened and heartbroken to hear the person did not stop," said Superintendent Parvin Ahmadi Wednesday morning. She appeared upset when we told her the accused had bailed out of jail but did not comment further on the case.

The girl, Lana Carlos, was in the crosswalk with her sister and had permission from the light to cross. Investigators say a raised up Ford F150 turned left from Manter Road onto Crow Canyon and hit and killed Lana. The intersection does not have a crossing guard but authorities will be taking another look at the area.

"Tomorrow I have a meeting with the county and the CHP to debrief. We are going to sit and debrief and see what else we can do to support the safety of our students. But I have to say this student was doing exactly what she was supposed to do. She was walking across the street on a crosswalk with the sign indicating it is safe to walk," Ahmadi said Wednesday.

As she studies traffic safety, she is also supporting a grieving community. She has brought in extra counselors at Creekside Middle School where Lana was a student. They will be there for a couple of weeks.

"In the library, we had a couple of counselors there just in case students wanted to come and talk to them and students did," she said.

She wants the focus to be on remembering the dynamic, happy girl Lana was and what a positive impact she had on people she met.

Crossing guard Lionel Simms, who works right outside the school, said her death really impacted him.

"It hurt. Because I see them from 6th grade up till they graduate. It's almost like they're my kids. It hurt. You just wonder what was the person thinking," he said.