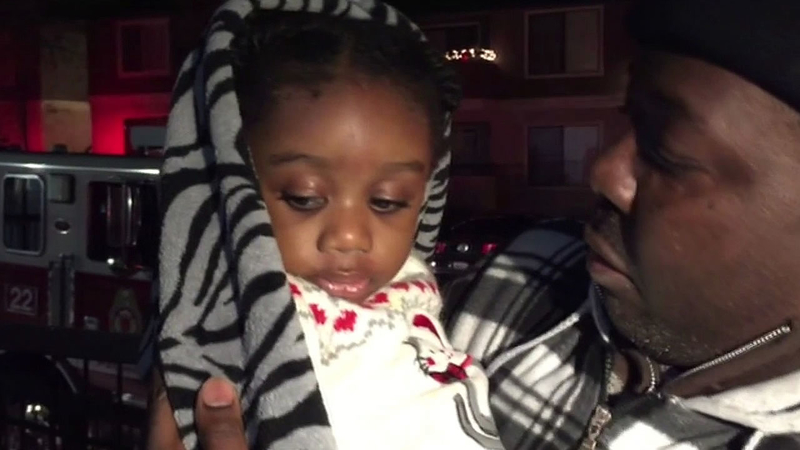 PITTSBURG, Calif. (KGO) -- A fire broke out on Peppertree Way in Pittsburg Tuesday, just after 6 p.m. Unfortunately, fire crews in the city were stretched thin because two fires erupted in Pittsburg within minutes of each other.

At the Peppertree Apartments at least 12 people are out of their homes. Investigators believe the fire was caused by a space heater plugged into an extension cord, which is not recommended.

Austin Udoh said, "Everything. I lost TV, my clothes, the Christmas presents I bought for people."

He was laid off from his job last month, and now his apartment and three others are destroyed. But Udoh and his wife are just thankful their 18-month-old daughter survived the fire.

Udoh's grand aunt was by herself caring for their daughter when she noticed flames shooting out of an electrical outlet. Neighbor Melissa Griffin helped carry the child to safety, just in time too.

"As I was bringing her down the stairs, the glass broke and fire started coming out," Griffin said.

Initially, only one engine and three firefighters were available to fight the blaze at the Peppertree Apartments. That's because another fire had erupted on the other side of town and crews were battling a house fire on Serrano Way. There were two fires within four minutes of each other.

Contra Costa County Fire Batt. Chief Keith Cormier said, "Resources were coming from Concord and they were sent to the other fire, which was a working fire as well."

No one was seriously injured in either fire, but this was that one situation firefighters were hoping would never happen.