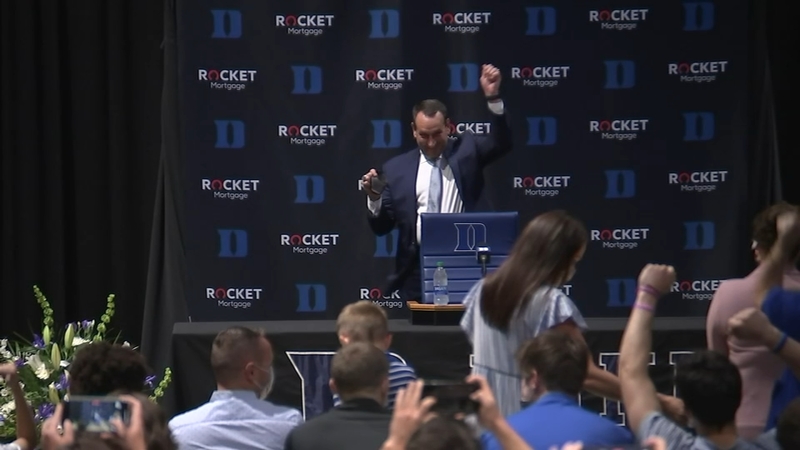 DURHAM, N.C. -- Legendary Duke basketball coach Mike Krzyzewski talked publicly Thursday for the first time since the world learned he would be retiring at the end of the upcoming season.

Before Coach K spoke, Duke University leaders briefly described what he meant to the university and the game of basketball. All of them praised him for his work both on and off the court, calling him the greatest of all time.

"Absolutely unparalleled. He's a legend and an icon. A man of integrity who has always done it the right way," incoming athletics director Nina King said.

Krzyzewski then spoke for about 15 minutes describing himself as a very lucky man who has had countless opportunities to succeed.

Legendary Duke basketball coach Mike Krzyzewski talked publicly Thursday for the first time since the world learned he would be retiring at the end of the upcoming season.

"Best opportunities are the ones that are backed up with belief," he said retelling a lesson his mother taught him many years ago.

Krzyzewski walked through highlights (and lowlights) of his career. Framing each turning point in his life as moments of opportunity and belief.

"In your darkest hours, it's not just about opportunity, it's about someone believing in you."

As for why he decided that now was the time to retire, Krzyzewski said it had nothing to do with health problems or the changes coming to college basketball.

"Those aren't the reasons. Those would be bad reasons," he said. "The reason we're doing this is because Mickie (his wife) and I have decided the journey is going to be over in a year."

Coach K says the reason he knew it was time to retire was because he wants to be able to spend more time watching his grandkids and "live a little through them. That's how I want to spend the rest of my time."

As for his last season, Krzyzewski said he wants to get Duke Basketball back to prominence. Last season, the team went 13-11 (9-9 ACC) and failed to make the NCAA tournament for the first time since the 1994-95 season in which Coach K had to step away due to an injury.

He said he does not want his team to get distracted by his retirement because he knows other teams are going to want to beat him one last time.

"As a competitor I know that it's my last time to beat your butt," he said.

Duke University previously announced that Jon Scheyer will be Coach K's successor. Scheyer is currently an associate head coach on the team. He is a former player who helped Duke win the national title in 2010.

Who is Jon Scheyer? Meeting the Duke basketball assistant who will be Coach K's successor

Scheyer served as interim coach last year for Duke when Krzyzewski was sidelined for a January win against Boston College due to COVID-19 protocols. Scheyer has never been a college head coach.

Coach K's announcement comes the same offseason that his rival at the University of North Carolina, Roy Williams, announced his retirement from coaching.

"Mike's been fantastic for the game of basketball," he said.