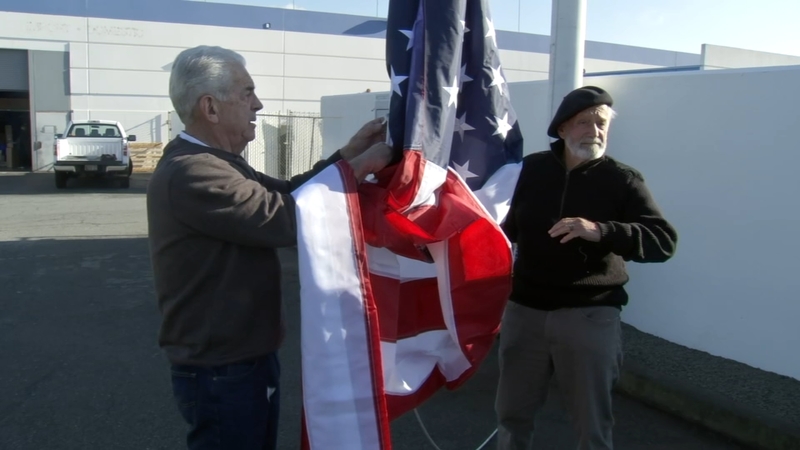 SAN FRANCISCO (KGO) -- A new flag is now flying on an old flagpole in Colma with quite a story behind it.

A 60-foot high flagpole on the property of Serramonte Ford on Collins Avenue has stood barren for years. Veteran John Mitchell put it there in the 70's. Mitchell's neighbor at the time remembers wondering what the heck he was doing.

"I lived next door and said 'what ya got this flagpole here for?' It's bigger than the one at the school where I taught! He said 'Well you gotta fly the flag'," remembered Reno Taini.

RELATED: Pearl Harbor Remembrance Day: A look back at December 7, 1941

Taini said Mitchell would stop by every day to raise the flag.

"He came back from the war and was, like most of them, about service...building a country. 'Let's do this, let's do that."

Taini said Mitchell died of cancer in the 80s and the flagpole hasn't flown a flag since.

"That was it. The flagpole just stood there and we went along with our lives."

World War II veterans will return to Pearl Harbor this week for the 80th anniversary of the attack that brought the US into the war.

But then, during a WWII book club meeting about a year ago, Taini and his group decided Mitchell deserved to be remembered. So they created a plaque with his story, put it at the base of his flagpole and raised a flag once again, for the 80th anniversary of the attack on Pearl Harbor.

Taini says he wants Mitchell's dedication to serving others to be passed on to future generations and hopes having a flag flying again will make a difference.

"That it just goes on. That people will see this and it will bring a little dignity to the town," Taini said.

When asked what he thinks Mitchell would say about the flag and plague Taini said,

"I think he is smiling up there in Heaven. He is looking down, smiling."