Mom has message about COVID-19 vaccine after 3-month coma

A 40-year-old Zumba instructor found herself in a three-month coma after testing positive for COVID-19 in April.
ABCNews
By Deena Zaru HOUSTON -- As Michelle Tate unpacked boxes to start her new life with her husband, Todd, and 7-year-old daughter, Morgan, in Texas, she began to feel increasingly fatigued and ill.

"I had been suffering for about two weeks, and I just kept buying over-the-counter medicine," Tate told ABC News. And although her husband urged her to go to the hospital, Tate, who was a healthy 40-year-old Zumba instructor, thought that she was just "adjusting to the weather" in a new city.

But one day in April, her daughter found her unresponsive.

"I had passed out," Tate said and after a neighbor called 911, she was rushed to the hospital and there she was tested for COVID-19.

"Mom, I wish I got vaccinated": A 32-year-old mother was due to deliver her baby days after she tested positive. Now, her mom is sharing her last message.

"When the test came back positive for COVID, I cried very hard ... I had heard so much about it. And people were literally dying ... I was petrified," Tate said.

At the time, her husband was already vaccinated and he and Morgan tested negative for COVID, but Tate had passed up a couple of opportunities to take the vaccine, she said because she had some reservations about it.

"When I was sick with COVID, I felt achy all over my body. Like I felt like I had been in a boxing match. I was extremely tired. I was out of breath all the time. ... I kept telling the nurse that my body hurts, my body hurts," Tate said.

She had no idea that it would be months before she would be able to see her family again.

According to Dr. Daniel Kievlan, who treated Tate, she was admitted to Memorial Hermann hospital on April 24 and was upgraded to the intensive care unit on May 2.

"That same day, we had to place a breathing tube and put her on a ventilator. And despite us, doing all of our tricks, and trying to maximize her oxygen levels, [we were] unable to keep her oxygen levels up," Kievlan told ABC News.

Tate was then put on "a very advanced life support" treatment -- extracorporeal membrane oxygenation or ECMO, Kievlan explained, where an IV was inserted into her neck.

"She was on ECMO for 84 days, was terribly terribly ill, was fully sedated and chemically paralyzed, unable to move," Kievlan said, adding that Tate was on ECMO longer than any other COVID patient at the hospital.

May passed and the summer set in, but Tate was still in a medically induced coma. She missed her daughter's graduation from first grade. She missed June and July.

When she woke up in August, Tate said she still thought it was April. She remembered being at the hospital but couldn't remember why. She had trouble with her short-term memory and had to re-learn how to live her life again.

All 50 states are reporting high community transmission of COVID as ICU beds are filling up in hospitals across the country.

She spent an additional month and a half at the hospital, where she had to go through rehabilitation, speech and occupational therapy.

But it wasn't until she saw her daughter for the first time that she was able to take her first steps without her walker. 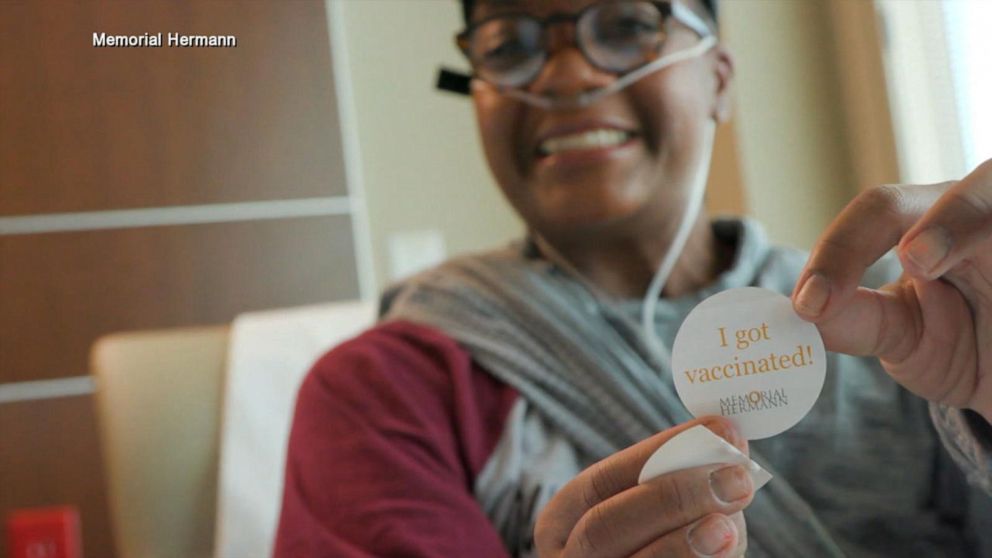 But before leaving the hospital and going back home to her family, she had one wish: to get the COVID-19 vaccine.

"I thought to myself, there is absolutely no way that I'm leaving the safety of this hospital without being vaccinated. I could not fathom contracting COVID again," Tate said.

Describing the moment the nurse handed her the sticker saying that she was vaccinated, Tate said that she felt "very proud" like she had just voted.

"Whenever we vote for a new president of the United States, I always feel like I've done my like due diligence as a human being, you know, as a American citizen," she said. "... Do not deprive yourself of that shot. It's very, very important. I will go as far as to say your life depends on it."

When she was finally discharged from the hospital and was set to go home, Tate wore a T-shirt with the words "a shot of hope," and as she walked down the halls of the hospital, several doctors, nurses and hospital staff lined up to wish her well.

She recalled how caring the staff was and how the doctors and nurses helped her recover, not only physically but emotionally.

"These are the best people in the world," Tate said. "I remember thinking that I wish I could take all of them with me. They were kind to me and my family."