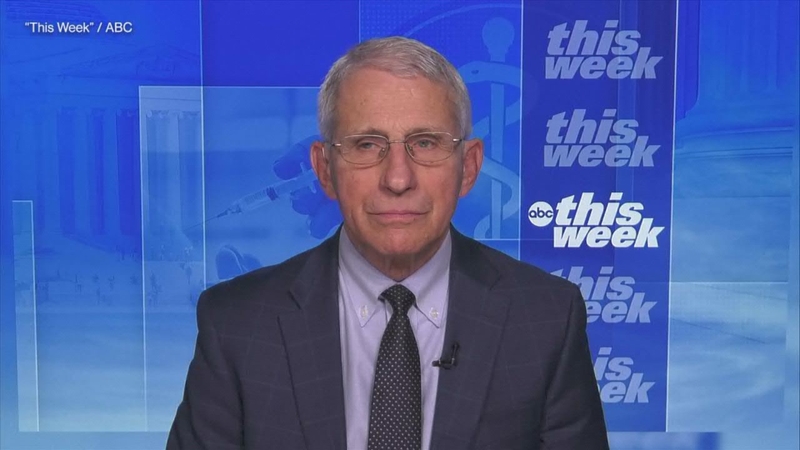 WASHINGTON -- Dr. Anthony Fauci said Sunday that the omicron variant appears to be overtaking all other COVID-19 variants, including delta, calling it "something to be reckoned with" as he advised Americans who will be gathering with family for the holidays to stay "prudent."

"If you are vaccinated and boosted and are prudent when you travel, when you're in an airport to be wearing a mask all the time, you have to be wearing a mask on a plane. Do not do things like go to gatherings where there are people who you do not know what their vaccination status is," Fauci told ABC's chief Washington correspondent and "This Week" co-anchor Jonathan Karl.

Fauci, the director of the National Institute of Allergy and Infectious Diseases and the White House chief medical adviser, added that the omicron variant has an "extraordinary capability" of transmitting from one person to another.

"This is really something to be reckoned with," he said. "It is really rapidly spreading literally throughout the world and certainly in our own country."

Fauci recommended that people get tested before getting together and noted that many people are choosing to take at-home rapid tests.

"Nothing is 100% risk-free, but I think if you do the things that I just mentioned, you'd actually mitigate that risk enough to feel comfortable about being able to enjoy the holiday," he said.

When pressed by Karl about long lines for COVID-19 testing and the unavailability of tests in some parts of the country, Fauci said help is on the way.

"What the government has been doing now, and you're going to be seeing the result of that, is making an investment, literally billions of dollars, to get anywhere from 200 million to 500 million tests available per month," Fauci said, adding that there will be a lot of tests -- many of which will be free -- available soon.

As omicron continues to spread like wildfire, Karl also asked Fauci if he sees any need for lockdowns in the United States in the near future.

"I don't see that in the future if we do the things we're talking about," Fauci said. But he went on to stress that with approximately 50 million eligible Americans still unvaccinated, it's "quite likely" that some parts of the country will experience a "significant stress" on their hospital systems.

Despite the new variant, some governors are deciding against reinstituting mandatory mitigation measures used earlier in the pandemic. Colorado Gov. Jared Polis, a Democrat, recently explained his decision not to reimpose a statewide mask mandate, saying that having vaccines effectively brought an end to the "medical emergency."

"At this point, if you haven't been vaccinated, it's really your own darn fault," Polis told Colorado Public Radio. "People who want to be protected are. Those who get sick, it's almost entirely their own darn fault."

Karl pressed Fauci, asking him if he agreed that the pandemic is becoming "a crisis of unvaccinated."

"It is certainly much more of a crisis of the unvaccinated, but there are other tools besides vaccine and wearing a mask [that] complements the protection that you get from the vaccine and a boost," Fauci said.

Fauci stressed that just because someone is vaccinated doesn't mean they can forgo masks in every situation.

"You can do both and should do both," he said.

While cases and hospital admissions are rising nationally, Fauci noted the promising data released by Pfizer last week showing its antiviral COVID-19 pill has near 90% efficacy in preventing hospitalizations and deaths in high-risk patients is a "big deal."

"There are going to be a lot of people of high risk who are going to benefit greatly from having a pill that would dramatically diminish the likelihood they're going to wind up in the hospital," he said.

Fauci will celebrate his 81st birthday on Christmas Eve, but he told Karl, "There's no way I'm going to walk away from this until we get this under control."

He added that stepping away now would be like "we're halfway through World War II and you decide, 'Well, I think I've had enough of this, I'm walking away.'"