Shocker in the ballroom: Top scoring couple gets sent home on 'Dancing with the Stars' 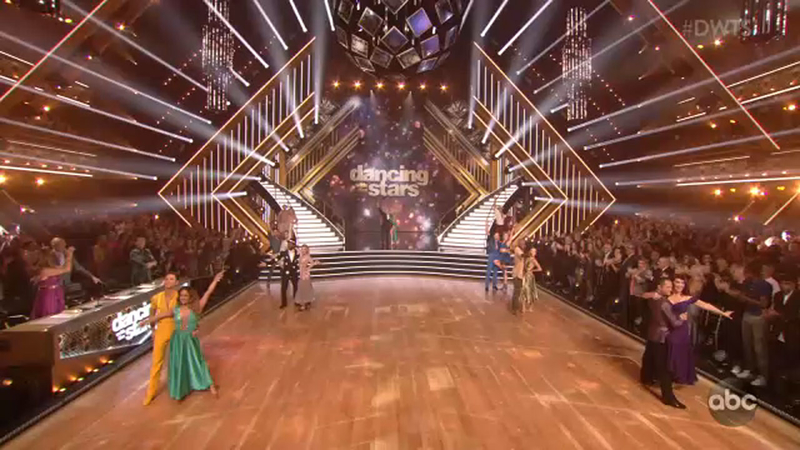 LOS ANGELES -- There are still nine couples fighting for the shiny mirror ball trophy in the 28th season of "Dancing with the Stars."

The Disney magic that was sprinkled around the ballroom last week meant no one was eliminated. So this week, the live-voting and judges scores from both this week and last week were combined to find out who got to keep going and who ended up in the bottom two to face the panel of judges.

Here's a rundown of the night's scores, from highest to lowest, plus the combined judges scores from both weeks:

James Van Der Beek: 27 out of 30 / 53 out of 60
No matter the style, James seems to be able to crush it. This week it was the samba. Everyone (including James) appeared to be a little worried about whether he'd be able to conquer the much needed, very specific hip action. His pro partner Emma had a unique training method and who knows if that's what did the trick, but he nailed the routine. Head judge Len Goodman had a new phrase: "tooty fruity what a booty!" Needless to say, they all loved it.

Kate Flannery: 27 out of 30/ 51 out of 60
The critique Kate got from the judges last week was to be more "into" the routine and character while still mastering the technique; the judges felt sometimes she's been more one than the other. Pasha's routine blended all the requirements (and he even put in a step called "the fleckle" that pleased Len to no end) and Kate got her highest scores yet. Len said he was a "happy chappy"; Bruno Tonioli thought the dance was tasteful and romantic; and Carrie Ann Inaba said Kate's hard work paid off and she owned the ballroom.

Sailor Brinkley-Cook: 27 out of 30 / 51 out of 60
Sailor is coming out of her shell more and more each week. She admits to her partner Val that she's always felt that she's in the shadow of her supermodel Mom. Big brother Val said now's the time to change that narrative and believe in herself. They take a "field trip" to Hollywood Boulevard and dance their jive for the tourists in the area. It may be a baby step but it helped and she pulled off a great routine. Carrie Ann said Sailor has found her groove; Len thought the dance was filled with taste, and personality.

Kel takes a deep breath and dives right into the quickstep. Len said he wanted to see more chemistry between Kel and his pro partner Witney so they worked on that, plus learning the tricky, fast dance. To help push him on moving his feet quickly, Witney scrubbed up a game of dodge ball and that got Kel jumping. Carrie Ann said this showed how teamwork makes the dream work; Bruno called Kel a full-time dancer; Len was the wet blanket who called them out for a mistake (Witney owned up to tripping on her dress).

Lauren Alaina: 26 out of 30 / 49 out of 60
This was a rough one! Lauren wrote a song to honor her late stepfather. Then she decided she wanted to dance to it! Gleb choreographed a lovely contemporary routine and somehow she got through it without breaking down in tears. (That happened during the judges remarks!) Her mother told Lauren the song brought healing to the family. Carrie Ann and Len told Lauren she was brave to do this with some much emotion right on her sleeve. Carrie Ann added that we were all blessed to witness it. Bruno said he was happy to see so much love, truth and honestly and advised her to always keep those things with her.

Ally Brooke: 25 out of 30 / 52 out of 60
Ally got a workout from her partner Sasha this week. He choreographed a quickstep that was very, very quick. But she kept up! They danced to the 80's anthem "Take on Me" by A-Ha, and Ally said even though she wasn't born then, she has an affinity for the era because it's a favorite of her parents. They were first out on the dance floor this week, and Len called the routine first class. Carrie Ann thinks Ally is growing, and gorgeous.

Karamo: 25 out of 30 / 46 out of 60
Karamo was flooded with emotions last week when he danced to honor his sons. The emotions returned this week, as Jenna choreographed a dance dedicated to Karamo's dad. The two had been very close when Karamo was young; they became estranged when he came out. He said he didn't speak with his Dad for about ten years, but they've started to rebuild their relationship. Karamo even invited Dad out to California for the first time to watch this week's competition. Len praised the light and shade and the lifts in the routine. Bruno enjoyed the focus, intention, strength and fluidity; and Carrie Ann said she felt like she saw Karamo's soul.

Hannah Brown: 24 out of 30 / 49 out of 60
Hannah and Alan had to do an odd mix this week: pair a country song with a Latin samba. Her parents are here from Alabama and that's helping her tap into her country roots (and miss home a lot!). The judges all acknowledged how difficult this task was and for the most part, they did a good job. Bruno wants to see more "bounce"; Len would like some more hip action; and Carrie Ann said she needs to stay a bit more "on the music."

Sean Spicer: 21 out of 30 / 40 out of 60
Sean earned his highest scores yet and is unquestionably showing improvement week to week. His partner Lindsay sees it, but also knows they have a long way to catch up to the pack. Sean dedicates his Viennese waltz to his wife as their routine is choreographed to Queen's "Somebody to Love." All three judges said they admire Sean's tenacity and work ethic, and are proud of his efforts. Still, his feet aren't quite in the same league as the other competitors.

With just minutes left before the end of the show, Tom Bergeron and Erin Andrews ran through the list. Safe: Lauren and Gleb, Karamo and Jenna, Kate and Pasha, Kel and Witney, James and Emma, Sean and Lindsay, and Hannah and Alan.

That means the bottom two are Sailor and Val, and Ally and Sasha. Time for the judge's verdict! Carrie Ann wants to save Ally; Bruno votes for Ally as well. The ballroom is shocked, and Sailor is in tears, but Val lets her know everyone is proud of what she's accomplished.