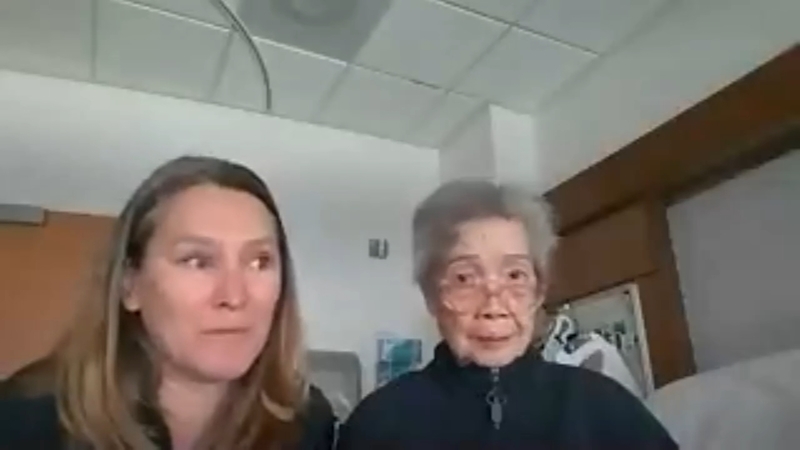 SAN FRANCISCO (KGO) -- For the first time, the 94-year-old woman who was stabbed multiple times while on a walk in San Francisco is speaking from her hospital bed.

Ahn Taylor, who goes by Peng, is recovering at San Francisco General Hospital after a man stabbed her in the torso and wrist Thursday morning.

Police arrested 35-year-old Daniel Cauich and say not only does he have a long criminal record, but cut off his ankle monitor after the crime.

Peng and her niece, Viva Taylor, spoke to ABC7 News Reporter Kate Larsen from the hospital.

"Have a lot of crazy people around" said Peng.

"She's one of the best people I know," she continued.

Viva is worried the assault will leave her permanently disabled, unable to use her hand. "She's Chinese, born in Vietnam, and so she's taught me all sorts of great recipes, but I don't think she's going to be cooking on her own for a while."

"I've been told by people who saw the video of the attack, it looked like a prison yard shanking. So I can just only imagine what Ms. Taylor the victim went through," said Vice President of the San Francisco Police Officers Association Lt. Tracy McCray.

McCray says officers jumped into action, immediately canvassing the 800 block of Post Street for surveillance video. She says they quickly located a picture of Cauich which they put out department-wide.

"Many officers recognized this suspect and they were able to find out that he was on an ankle monitor, they coordinated with the sheriff's department to track that ankle monitor and to locate him," said McCray.

McCray says Cauich had already cut off his ankle monitor when police arrested him.

She says Cauich is familiar to officers.

"Mr. Cauich previously had been arrested within the past year and a half approximately six times for various crimes most of them burglary-related crimes," said McCray.

In 2016, Cauich was arrested on murder charges in a Mission District stabbing. According to the San Francisco Chronicle, a judge dismissed the charges in 2019 for lack of evidence.

San Francisco District Attorney Chesa Boudin tweeted, "It is troubling to see the POA exploit a tragedy for political motivations and spread misinformation to the public. Just last month, after filing new felony charges, our office filed a motion to detain Mr. Cauich in jail. The court disagreed and released him on ankle monitor."

It is troubling to see the POA exploit a tragedy for political motivations and spread misinformation to the public.

Just last month, after filing new felony charges, our office filed a motion to detain Mr. Cauich in jail. The court disagreed & released him on an ankle monitor.

"The previous five times he was not held and there was no motion to detain so that's a one out of six stat that isn't easily explained," said McCray.

Viva is concerned that Cauich had the opportunity to assault her elderly aunt.

"I don't want somebody on the street like that who's a danger to society and the community and old people especially," said Viva.

Viva says Peng is moved by the outpouring of support but is upset that in the moments after she was attacked - in broad daylight - nobody stopped to help.

"At first nobody was paying attention to her and I think we've gotten in this city a little dehumanized, less connected, and we're all suspicious of each other. We need to stop and listen," said Viva.