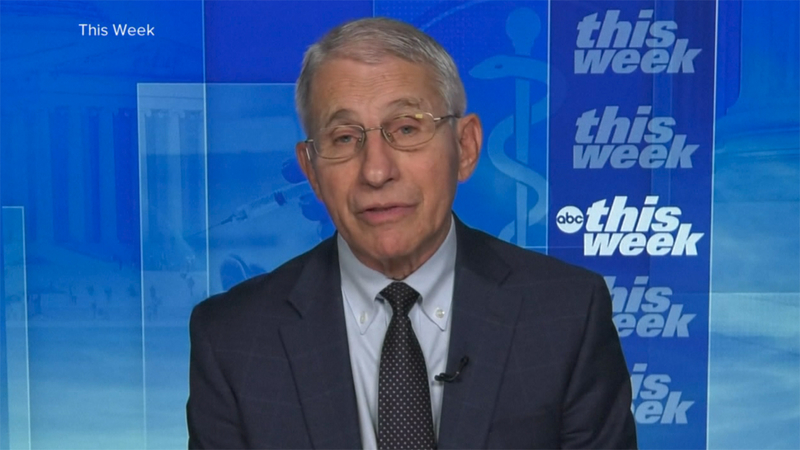 In "sobering news," omicron can evade the protection initial vaccines give, but boosters increase efficacy and better protect against the newest variant of concern, Dr. Anthony Fauci said Sunday.

The variant can also evade protections provided by monoclonal antibodies and convalescent plasma, the White House chief medical adviser told ABC's "This Week" anchor George Stephanopoulos, so, "If you want to be optimally protected, absolutely get a booster," he said.

Omicron has a high degree of transmissibility, which Fauci said is easy to see as the delta and omicron variants compete for dominance. In the United States, the national average seven-day COVID-19 case rate has increased 12% and hospitalizations have gone up 11%, according to ABC's COVID-19 Tracker.

Fauci said there are 60 million eligible Americans who are not yet vaccinated and about 100 million who are eligible for boosters. According to the Centers for Disease Control and Protection, 60.7% of the entire U.S. population is fully vaccinated, and around 26% of people in the country -- more than 50 million -- have received a booster dose.

Jim Dolan has more on the omicron variant and what preliminary data suggests about the potency of the new strain.

The omicron variant was discovered in southern Africa last month and has been deemed a "variant of interest" by experts. Early anecdotal data has shown that most who contract the new variant experience mild illness, but the main consensus among experts is that it's too early to tell what the long term impacts will be.

"The level of severity appears to be maybe a bit less than delta. But there are a lot of confounding issues there," Fauci told Stephanopoulos. "It may be due to the underlying protection in the community due to prior infections, but these are just preliminary data that we're going to have to just follow carefully to get them confirmed."

With omicron's transmission advantage and protection evasion, Stephanopoulos pressed Fauci on whether a three-shot vaccine regimen will become the standard of care -- something he has been reluctant to declare yet. But while the official requirements remain two doses of an mRNA vaccine and one dose of the Johnson & Johnson vaccine, getting a booster is the "optimal care," Fauci said.

However, Stephanopoulos pointed out, the World Health Organization has said boosters will exacerbate global vaccine distribution inequities and asked richer countries to hold off on boosters. The main concern is that some people are getting multiple doses, when those in other countries have yet to receive their first shot.

"That's an understandable concern, but it isn't really that valid if you do both," Fauci responded. "We are, right now, vaccinating our own country, we're going to be boosting as many people as we possibly can. But you can also simultaneously make doses available to the developing world."

According to Fauci, the U.S. has given "over 300 million doses to over 100 countries." The U.S. has pledged to give upward of "1.1 billion doses" and have given more assistance "than all of the other countries combined."

After nearly two years of lockdowns, masking and consistent news about the longevity of the pandemic -- Fauci said yearly boosters are a possibility -- some people are experiencing "pandemic fatigue." Touching on that, Stephanopoulos asked Fauci if there are any signs of hope he sees for this holiday season.

"Well, we have the tools to protect ourselves," Fauci said. With vaccination, "We can go a long way to getting us through this cold winter season, which clearly is always associated with a spike in respiratory illnesses."

And cases are going up. In New York, while vaccination rates per 100,000 people have gone up 68% over the last seven days, the cases have jumped, leading Gov. Kathy Hochul to say a statewide mask mandate will be implemented Monday. The mandate requires that masks are worn indoors in public places and businesses, unless one shows proof of vaccination.

There's also fatigue -- and protests -- regarding masks, something Fauci hinted toward when talking about tools to stay safe.

"Masking is not going to be forever, but it can get us out of the very difficult situation we're in now," Fauci added.

Low vaccination rates in young children may be contributing to the difficult situation. Stephanopoulos brought up the statistic that less than one in five eligible children have been vaccinated so far.

Fauci spoke directly to parents, saying, "if your child is 5 years of age and older, please get them vaccinated. We need to protect the children. This idea that children are not vulnerable at all is not so."

While children who contract COVID-19 don't typically experience severe symptoms, "over 2 million children from 5 to 11 have been infected," Fauci said. "There have been over 8,000 to 9,000 hospitalizations and well over 100 deaths. So it's not only good for the health of the child, but also to prevent the spread in the community."