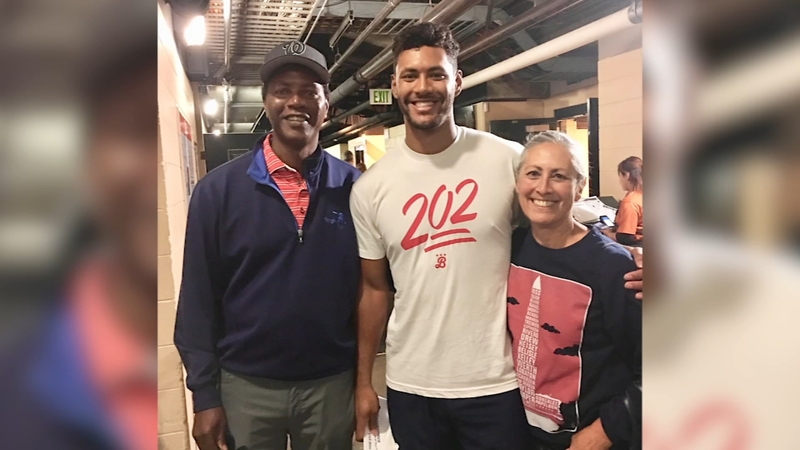 SAN FRANCISCO (KGO) -- A Bay Area doctor is being hailed a hero after making quite a save at Oracle Park on Saturday. In a split second, the action turned from the game on the field to what was happening in the stands -- and that's when he really came in clutch.

A day at the ballpark Saturday became one this man won't soon forget.

Doctor Willie Ross went to Oracle Park to cheer on the Nationals as they took on the Giants. You may be wondering, why he wasn't cheering on the home team? Dr. Ross is father to two major league players -- including Nationals pitcher Joe Ross.

Joe was sidelined for the game, but his dad sure wasn't.

In the middle of an inning, a woman seated nearby started choking and gesturing that she couldn't breathe.

"I gave her a couple of thrusts of Heimlich maneuver and, um, small piece of hot dog came out," said Dr. Ross.

But one try wasn't enough.

The Oakland Athletics and San Francisco Giants begin the Bay Bridge Series at Oracle Park, for the biggest event since the coronavirus pandemic hit.

"So then I gave her two hard thrusts and, uh, sort of a thumb-sized piece of hot dog came out and she was much better," he said.

The woman is a retired nurse, so being the person in need of help was definitely not something she was used to.

Dr. Ross said fans cheered. But, never expecting to be the hero of the day, he said he wouldn't think twice about helping someone who needs it.

RELATED: On the road at home: SF Giants broadcasters adapt to calling away games remotely

"These are things that you see and you react to right away (and you're) not necessarily thinking about what you're doing, but you see something that's wrong and you recognize that someone needs assistance," he said.

As for the Giants -- they recognized that Dr. Ross deserved a "thank you." An usher presented him with a memento from the game.

News of the in-the-stands heroics spread fast. Dr. Ross said he got a text from his other major league son before even leaving Oracle Park. Even the Nationals manager had something to say about it.

And ever the baseball dad, Dr. Ross knows a thing or two about walk-off wins. But today, it was one of his own.