What makes this eclipse so rare? And more facts and figures 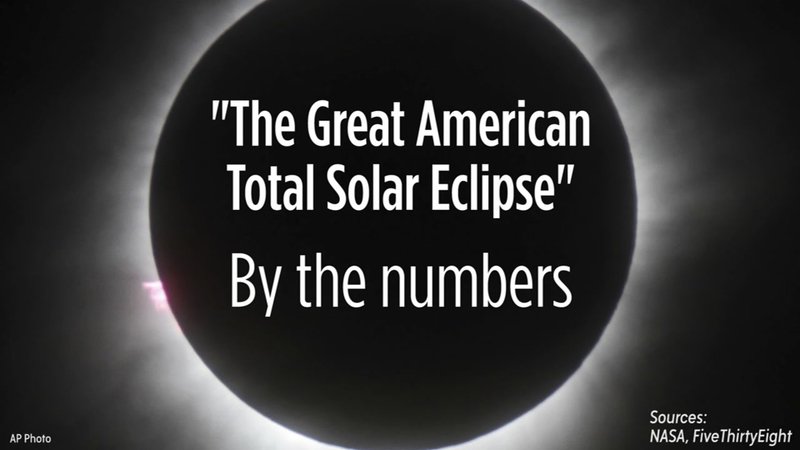 Total solar eclipse by the numbers

Scientists are calling the solar eclipse that will happen on August 21 "once-in-a-lifetime," so what makes it so special?

Here are some facts and figures that have the experts at NASA and FiveThirtyEight excited about the celestial event of the year.

Earth has 2-3 solar eclipses per year

If the moon passes the sun every month, why don't solar eclipses happen more often?

A solar eclipse happens when the moon blocks the path from the Earth to the sun, casting a shadow. The moon is about 400 times smaller than the sun, but it is also about 400 times closer, making them appear about the same size in our sky. Because the moon revolves around the Earth on a changing angle, it only passes directly in front of the sun 2-3 times a year.

Most eclipses are not total

There are four types of eclipses. Partial eclipses, when the moon only crosses part of the sun, make up about 35.3 percent of solar eclipses. About 33.2 percent are annular, which means the moon passes completely over the sun, but it is too far away to completely cover it completely. About 26.7 percent are total, when the moon completely covers the sun. Hybrids, which is when an eclipse begins as either total or annular and then transitions into the other, make up less than 1 percent.

Total eclipses are rarely seen in the U.S.

Because a total eclipse is only visible from a narrow path along the Earth, they can't always be seen from where humans live. Any given point in the world will only see a total solar eclipse every hundred years or so, though they are not always this far apart. As it happens, residents of Carbondale, Illinois, will be able to see this total eclipse as well as the next one to cross over the U.S. in seven years.

The next one isn't too far off. On April 8, 2024, an eclipse will be visible along a path from Texas to Maine.

On August 21, all 50 states will experience at least a partial solar eclipse. NASA created an interactive map that gives the start and end time of visibility at any given point.

As for the "path of totality," where the total eclipse will be visible, 14 states fall into it. Only a sliver of the path falls into Montana and Iowa, while the path goes straight across other states. Here are all 14:

The "path of totality" will get an incredible view

The total eclipse will be visible along a path from Oregon to South Carolina which is about 70 miles wide. Along this path, up to 99.4 percent of the sun will be covered, plunging viewers into darkness during the day. The closer you are to the center of the path, the longer the total eclipse will last. Some cities will see more than 2.5 minutes of darkness.
Report a correction or typo
Related topics:
weathersolar eclipsenasafivethirtyeight
Copyright © 2022 KGO-TV. All Rights Reserved.
RELATED
NASA issues safety warning for August eclipse
How to safely watch the solar eclipse
How will the total solar eclipse affect your animals?
Why are solar eclipses so rare?
SOLAR ECLIPSE
2 years and counting until 'ring of fire' eclipse occurs over US
US experiences 1st solar eclipse since 2017 this morning
Best meteor shower of the year coming in December
Eclipse photo appears to show "devil horns" over Middle East
TOP STORIES
Gov. Gavin Newsom in LA after 'porch pirates' target cargo trains
Suspect shot, killed by police at SFO had replica guns, officials say
McConnell: Black people vote at similar rates to 'Americans'
Medicare not paying for at-home COVID tests for seniors
Adele postpones Vegas residency due to COVID among crew
FBI issues new warning on QR codes
Reporter hit by car on live television, but continued reporting
Show More
Search for missing Stanford nurse Michael Odell
American Airlines flight diverted over maskless passenger
Only one monoclonal antibody treatment is effective, NIH says
COVID-19 cases, hospitalizations plateau in SF but 'still high'
Researchers test pig-to-human kidney transplant in donated body
More TOP STORIES News