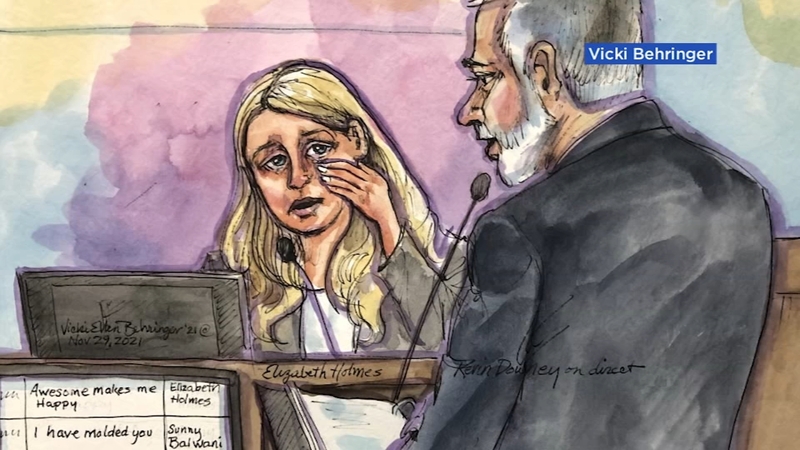 SAN JOSE, Calif. (KGO) -- Elizabeth Holmes retuned to the stand Monday revealing a new layer of her defense: she was raped.

The former Theranos CEO accused of swindling investors out of millions continued pointing the finger at her colleagues claiming ignorance to questionable decisions and reported failures.

In emotional testimony, Holmes told the jury she stopped attending classes after she was raped during her time at Stanford University. Struggling to cope, she suppressed the pain by dedicating all her time to building Theranos.

Later Holmes choked up again as she described the relationship she had with her former COO and boyfriend Sunny Balwani - accusing him of repeatedly raping her throughout the course of their 11 year relationship.

"He (Balwani) would get very angry with me... sometimes he would come upstairs and force me to have sex with him when I didn't want to," said Holmes.

Holmes defense continued to paint a clear picture of a two-pronged strategy - she had true belief in her own product and severe abuse and coercion from Balwani.

"It definitely goes to her defense that she was unable to commit fraud, that she didn't live a life of mediocracy and she testified to how much influence he had over her life," said Michele Hagan, a legal analyst and former prosecutor who is closely following the trial.

But Hagan says there's one part of this testimony that may raise questions.

"She documented the abuse but I'm sure the prosecution is going to point out she only documented a few instances and they've been dating 11 years," she said. "So what else was going on? Was it that? Or was it that he was abusive and they were both under an immense amount of stress that the company was failing?"

The defense portrayed Balwani as a constant critic of Holmes. When asked about the specifics, Holmes testified he would tell her things like "I'm astonished by your mediocracy" and "If you follow your instincts, you will fail."

"It's definitely compelling testimony to figure out if she really did form the intent to commit fraud or whether she was doing what she was doing," Hagan said.

When it came to reported failures in the lab, Holmes again pointed the finger at her colleagues for issues like modifying test demo results. She again denied any direct involvement.

"It puts her in a corner," said Hagan. "She's been laying the framework for all the reasons why... which may be truthful but the thing is now it's her credibility versus all the other witnesses."

The prosecution's cross examination could resume as early as Tuesday with the potential for additional witnesses to be called to the stand.